Nuclear Crisis in the East: Will Mothman Strangeness Ensue? 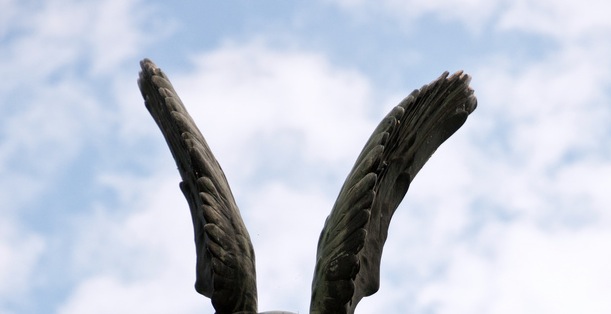 In the days since the tremendous 8.9 magnitude earthquake that rocked Japan late last week, mounting concerns over complications at Japan’s damaged Fukushima nuclear reactor have begun to eclipse the quake’s general devastation. The effort to prevent release of harmful radiation into the surrounding area has resulted in fears elsewhere around the world just as well, presenting a number of unpleasant economic consequences. For instance, the Dow Jones dropped by 1.15% today, as concerns about economic stability in the East increased around the globe.

Writing for Politomatic.com earlier today, I noted that according to France’s nuclear watchdog, as well as info released by the IAEA, “a third explosion at Japan’s Fukushima power plant, the result of damages incurred during last week’s tremendous 8.9 magnitude earthquake in the region, has caused a nuclear crisis that is ‘second to Chernobyl’.” Similar comparisons have been made of the Japanese crisis to the 1979 Three Mile Island incident, and much the same, a number of Fortean parallels have begun to emerge also, especially those which equate strange winged phenomena with forebodings of disaster.

However, before proceeding into cultural cross-examination that will relate some of the elements of this tragedy to reports of Fortean phenomenon elsewhere in similar past incidents, I wish to express that doing so is not to be misinterpreted as a general lack of concern for the overall gravity of the situation now unfolding in Japan. This horrific natural disaster has resulted in tremendous loss of life already, and with any luck, the nuclear crisis at Fukushima will be contained before any more devastation can occur. As I have done in the past, I ask Gralien Report readers to please consider donating to any of the numerous charities now collecting relief funds for the disaster, which I’ve listed at the bottom of this page.

As is often the case with disasters, strange phenomena have traditionally shown a tendency to occur in the nearby vicinity; that or, at very least, the perceived appearance of strange phenomenon. So as not to be vague, I’ll explain a little more in-depth what I mean by this notion that “perception” may play a strong roll in tragedies.

Rather obviously, the appearance of, say, the Mothman of West Virgina may or may not actually have anything to do with disasters such as the collapse of the Silver Bridge on December 15, 1967. Of course, researcher John Keel had been in the area researching reports of what may have been an unidentified winged creature in the months prior to the accident, and since the publication of his book The Mothman Prophecies in 1975, the notion that the strange beast’s presence served as some kind of omen has become almost as prolific as the literature associated with the strange “Mothman” creature itself. In truth, it becomes quite easy to associate strange happenings with disasters and the like, since it appears to be a fundamental construct of the human psyche to lay blame for our misfortunes on the darkest and shadiest among us. When none can be found, it seems logical that a menace will be named, regardless.

This observation, of course, does not seek to offer that a “Mothman” never existed, but instead that the creature’s alleged presence, rather than being truly connected with the collapse of nearby infrastructure, may have been a more likely coincidence. The weird critter, whatever it was, had chosen a terrible place to be at any given time, and as a result, “Mothman”–whatever it actually was–will forever be associated with disasters.

Since the present nuclear disaster in Japan has already been compared with the 1986 breakdown of the Chernobyl reactor, it is interesting to note that urban legends began to circulate around the time of the release of the 2002 film adaptation of Keel’s Mothman Prophecies, stating that sighting of a large winged beast also occurred prior to the Chernobyl incident. This rumor has been dispelled by researcher and Mothman expert Loren Coleman (who commented on the matter here at the Gralien Report in this post back in October of last year). Nonetheless, the preexisting idea that Mothman was somehow associated with terrible disasters managed to help this tall tale proliferate… will the same occur later on with regard to the present trouble in Japan?

Wait, I’ve spoken too soon (or perhaps not soon enough). At the Godlike Forums website, this thread already offers an utterly ridiculous example of Mothman appearing in the aftermath of the resulting tsunami that followed the quake. The video in question, which can be seen by clicking here, seems to show the shadow of a helicopter passing overhead (the helicopter can actually be seen in a second piece of footage depicting a bird’s eye view of the same area, as represented at the one minute mark in this video). So much for it being “Mothman,” I suppose. I trust that future misrepresentations may seek to offer similar claims of Mothman’s enigmatic (and perhaps unwelcome, though unfairly branded as such) presence.

UPDATE: Indeed, a new report that has come to light suggests that some large, winged entity was seen near the vicinity of the Fukushima reactor prior to this disaster. If the claims being made are true, is this a mere coincidence, a case of mistaken identity, or something more?

That said, if you would like to make a donation to one of the many organizations assisting with disaster relief, you may do so by contacting one of the following:

The American Red Cross (www.redcross.org) is providing SMS text services for $10 donations, as simple as texting “REDCROSS” to 90999 from your phone; you may also reach the International Medical Corps ( visit www.internationalmedicalcorps.org, or text “MED” to 80888 from your phone for a $10 donation), Save the Children (www.savethechildren.org), the Salvation Army (www.SalvationArmyUSA.org or text “JAPAN” or “QUAKE” to 80888 to make a $10 donation), and the newly founded Japan Earthquake and Tsunami Relief Fund (click here to learn more).

All of these are avenues where you can provide relief through your generous contributions. Again, please consider giving when and where you can to help those in need.

4 Replies to “Nuclear Crisis in the East: Will Mothman Strangeness Ensue?”