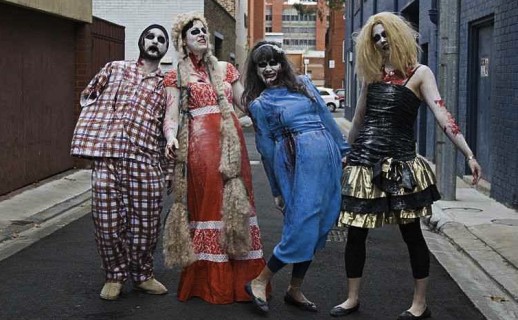 “Personally, I do not believe in UFOs or zombies,” said David Lory VanDerBeek, a candidate for governor of Nevada, in a recent statement on his website. Then, in what was destined to be one of the strangest statements made by a politician thus far this year, he further asserted that, “neither does anyone in the federal government,” though in his estimation, “It is quite likely that our government has a created a bio-chemical weapon that can induce zombie-like behaviors in humans and therefore assist in a mass murder event to promote global depopulation without taking the blame.”

VanDerBeek’s odd statements were in relation to an alleged “Zombie-UFO Crash Exercise” that FEMA had allegedly posted information about on their website for a short time before replacing them with a message stating that the plans were “only for coalition members.” VanDerBeek disagreed with this action, interpreting it as an instance where agencies like FEMA re required to provide transparency in order to maintain public knowledge and safety. So was FEMA out of line with their choice in witholding certain information from the public at large about such a bizarre excercise? We’ve included VanDerBeek’s original (and rather odd) video below, where he spends nearly 20 minutes on camera discussing the strange FEMA drill… but if you thought things couldn’t get any more bizarre, think again…

Below is the original video, uploaded to VanDerBeek’s personal account, where he argues that the video “should go viral,” and that it must “appear on the Drudge Report” and on other mainstream and “alternative” media sites:

VanDerBeek went after the organization (which he says has been in touch with him since his video appeared online), stating the following about the bizarre drill:

Because this drill is supported by federal funds paid by the taxes of the US people including the citizens of Nevada, you are required to provide the public with precise information about your activities in this drill. I expect you to respond within the week with an email with the detailed information regarding the two scenarios mentioned. I also expect the email and phone number of your immediate supervisor. Whether or not you cooperate, I will be reporting your response or lack thereof to the nation on my television show and youtube channel.

While VanDerBeek’s statements regarding the use of taxpayer dollars and general transparency about the drill and its functions are logical, a number of other statements are indeed very strange, to say the least. For one, the assertion that “It is quite likely that our government has a created a bio-chemical weapon that can induce zombie-like behaviors in humans,” is a very odd thing for a potential candidate for governor to be claiming; perhaps we can assume that the general line of thought he had been following has to do with the mysterious cannibalistic “zombie” attacks reported during the last year. Many claim that the use of dangerous bath salts as a hallucinogen have caused such random acts of violence, while more elaborate conspiracy theories suppose that the attacks result from airborne contagions that cause victims to exhibit violent, psychotic behavior.

As to VanDerBeek’s statement that no one else in the Federal Government believes in UFOs, that could easily be debated, especially when taking into consideration the work of Ufologists such as Grant Cameron, who has extensively researched the connection between US Presidents and the UFO engima. However, VanDerBeek later changes his position somewhat, stating in the video that “I’m not saying there are no UFOs in the great expanse of the Universe,” but that, “personally,