Some Thoughts on Evading Temporality 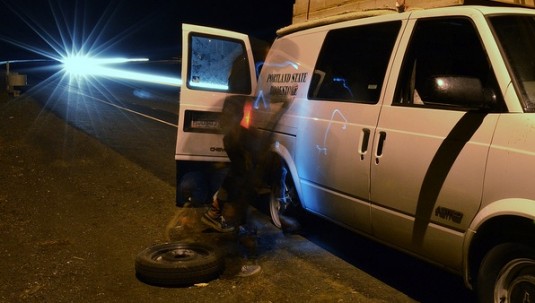 Over at the Mysterious Universe blog, my fellow researcher Nick Redfern recently did an article on “Time Traveling Ufonauts,” in which he speculated on how the appearance of some UFO and MIB-related phenomenon could actually stem from technologies based in our future.

In the comments thread below, some of the readers engaged in a debate about whether or not time travel is even possible in the first place. Not to ride the proverbial fence too greatly, but of course, it became suddenly the case for me to be try to fit snugly between the “for” and “against” arguments, and instead explore the potentials for non-temporal phenomenon that might emanate from the future (or the past, for that matter), and how a person from our present day might perceive such phenomenon. Below I’ve excerpted my own comment from the thread:

I too have wrestled with the “time travel” theory as it may pertain to some UFO phenomenon. In my new book, The UFO Singularity, rather than adopting the view that beings from the future literally travel here in time machines, I have wondered instead whether some UFO phenomenon (and in truth, perhaps other varieties of Fortean phenomenon) might not stem from what we could call something akin to anomalous “temporal inconsistencies,” or physical circumstances capable of producing inexplicable rents in temporality and space-time.

It is beyond the scope of the present discussion to presume how or why such a “time-slip” might occur (borrowing another popular term for the phenomenon here), but I still think that there is at least the potential existent which, rather than presenting us with actual “time travel,” could nonetheless present circumstances that might allow present-day humans to perceive both events from the past (i.e. ghosts and traditional reports of “time slips” that generally favor past events), and perhaps events or objects stemming from our temporal future as well. Could some UFO phenomenon constitute the latter? Who knows…

One big issue we’re left to deal with, if the latter were in fact the case, would be the apparent thermodynamic “arrow” of time. In other words, entropic forces prevent us from perceiving the future, although the human brain can certainly store memories of the past. As much as I dislike many of Stephen Hawking’s other theories (namely his dismissive attitude toward UFO phenomenon), he seems to be spot-on in his determinations as to why humans can’t perceive “memories of the future,” to borrow Mr. von Daniken’s terminology. Thermodynamic laws and, namely, that little hiccup we call entropy seem to disallow that… but if the temporal past nonetheless remains accessible in some way (even if only to memory, and of course, through physical mediums like film and photos), then how does this logic pertain to future humans, whose mastery of nanotechnologies, etc, may allow them a greater degree of control over the manipulation of temporality? If these beings could influence their own past, how would you or I perceive it today? And furthermore, if advanced science of the future one day discovers ways to overcome things like entropy, will so called “perfectly efficient” machines allow humans to begin to perceive aspects of the future, either through things like advanced A.I., or maybe even synthetic enhancement of physical human bodies?

It provides some food for thought, at very least… although I don’t think any of what I’m discussing here really constitutes the traditional notion of “time travel” by any means. Nonetheless, certain future technologies that may evade temporality and time, essentially, as we know it today, may indeed have an influence over various observable phenomenon humans are capable of witnessing today… and these would no doubt be referred to by the likes of Nick Redfern and I as being “high strangeness.”

One Reply to “Some Thoughts on Evading Temporality”