Was Medvedev Serious When He Mentioned Aliens? 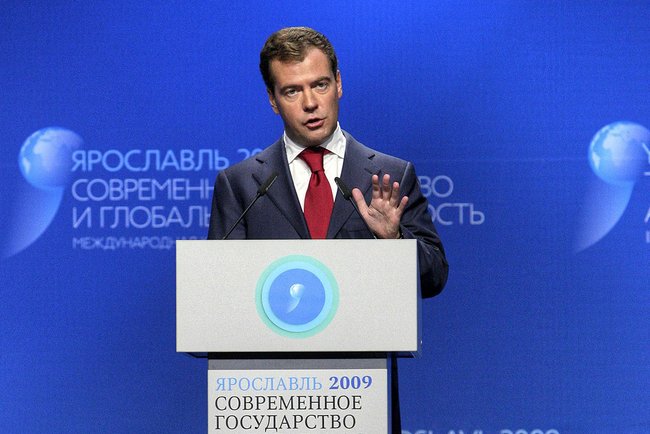 We love it when world leaders appear to speak candidly about UFOs and supposed conspiracies of silence in our midst. Recent news that Russian Prime Minister Dimitry Medvedev had spoken between interview segments about “aliens living among us” have recently captured the public’s eye, with commentary on the statements having been featured around the web on various news sites.

Appearing at the Telegragh, below is the actual statement that spurred the controversy:

[One] of the journalists asked whether the president is handed secret files on aliens when receiving the briefcase needed to activate Russia’s nuclear arsenal. “Along with the briefcase with nuclear codes, the president of the country is given a special ‘top secret’ folder. This folder in its entirety contains information about aliens who visited our planet,” Mr Medvedev answered playfully.

“Along with this, you are given a report of the absolutely secret special service that exercises control over aliens on the territory of our country … More detailed information on this topic you can get from a well-known movie called ‘Men In Black’ … I will not tell you how many of them are among us because it may cause panic,” he says.

Despite the fact that the media has made it fairly clear already that Medvedev was joking, several have speculated nonetheless about the Prime Minister’s statements regarding the supposed existence of alien lifeforms here on Earth. Just to dispel any further concerns over the legitimacy of Medvedev’s retort, we would like to make one thing clear: he was indeed merely joking, and here’s why…

One of out Gralien Report field correspondents based in Europe, Billy Clark, initially sent the story along to us, noting some of the oddities surrounding the statement and, more importantly, media attitudes toward the entire matter:

“I got to thinking why he would say this, even as a joke and why was he even asked such a question? …[I]t seems far more likely that he was joking. This (video linked here) also backs it up as being a joke… But I still think there is more to this. The behaviour of the media strikes me as very odd. Why suddenly pull the Sky News report? Why nothing in the news sources even stating that this was a joke?”

Our correspondent was all over this… so much so that, as he correctly noted, at that time much of the mainstream media had remained silent on the matter (and the Telegraph report linked above had not been issued). However, Clark shared our view of the obvious: that Medvedev had been joking… hence, at the time, it certainly seemed odd that, as Clark mentions, an initial report on the story had apparently been pulled, and no one else was touching it, at least for a few days.

With the obviously dubious nature of Medvedev’s statement (he also mentions his belief in Father Christmas, among other silliness), one would assume that the media would be all over this.

Just after the email from Billy Clark, I received further correspondence on the matter from Ukrainian UFO Researcher Paul Stonehill, one of the more active voices (and well-known here in the west) regarding Russian UFO research. Stonehill noted the following: