Mysterious Manifestations: Did Madame Candler Conjure Spirits of the Dead? 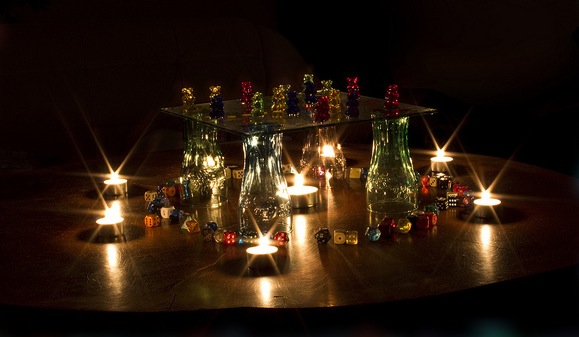 Looking back on the practice of mediumship during the nineteenth century, the majority of the claims made by spiritualists of that strange period are taken today with a healthy dose of skepticism. Known for elaborate trickery involving moving tables, the production of “ectoplasm”, and feats such as levitation and automatic writing, there is much in the sordid history of American spiritualism that brings trouble to the skeptical mind, especially if it has to do with claims to the veracity of what many mediums had said they were actually doing at the time.

Nonetheless, a rather strange set of circumstances was shared with me a while ago, courtesy of a Gralien Report correspondent and good friend of mine named Vance Pollock, having to do with a medium that was once well-known in the Southern California area. Bertie Lilly Candler, whose name appears equally throughout the works of various spiritualist circles and early UFO and contactee accounts alike, was believed by many to be one of the finest, and most believable spirit mediums of her day (though it should be noted that her operations took place in the early twentieth century). According to Pollock, she was so good, in fact, that she had on several occasions caused manifestations of the deceased–right before the startled eyes of family members–who would later report that the individual with whom they were interacting, without question, could have been no other than their lost loved one.

Vance told me about one occasion in which Candler had apparently managed to track down the wayward spirit of a deceased medical supply and pharmaceuticals salesman, who she then “manifested” before an emotional widow and young daughter. Pollock had tracked down the latter of these two after a lengthy search, and was able to interview her about the experience. “Without question,” Vance said, “she had felt that the person she saw that evening could have been no one else but her deceased father.” Apparently, the witness said that this incredible apparition had even undone his tie, having pulled the knot off to the side in a familiar fashion that the woman’s late father had often done upon returning home from work in the evenings!

Could it actually be that the once famous Bertie Lilly Candler had managed to harness an incredible ability to manifest spirits of the dead (among other things, as we’ll soon see) at her popular s

One Reply to “Mysterious Manifestations: Did Madame Candler Conjure Spirits of the Dead?”