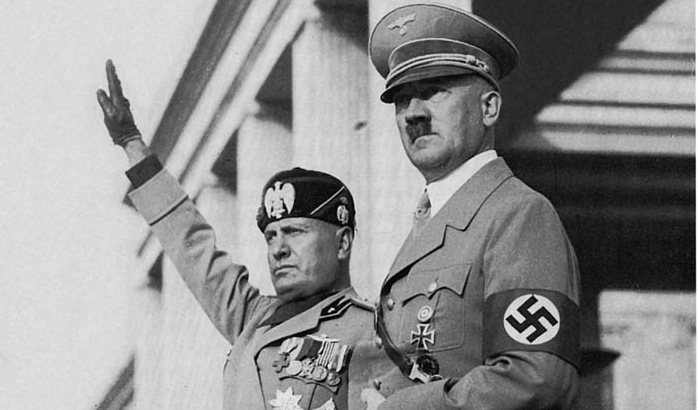 Man has always held a particular fascination with the dark side. Whether it be the intrigue and thrill of embracing certain cultural taboos while behind closed doors, or conversely, donning the appearance of darkness and danger so as to stand out in a crowd, the embodiment of negativity in our culture has always harnesses a particular appeal. As the controversial performer Marilyn Manson once put it, perhaps this is because “we all fall a little short of the glory” ourselves, and there is a certain natural tendency that results to embrace mankind’s darker shortcomings, if only in sparing amounts.

As evidence of this, according to the numbers there seems to be a rise in interest among subjects pertaining to Nazism, says Clive Anderson, who yesterday presented his program “Nazi Gold: Publishing the Third Reich,” on BBC Radio 4. Writing for BBC News Magazine, the author delved into this odd, slightly disturbing trend a bit, noting that “The phenomenal and continuing success of books about the Nazis includes fiction, non-fiction and science fiction.” The well known occult connections to Nazism, as well as “Nazi magic, Nazi weaponry and Nazi doctors” are all elements Anderson lists at the forefront of this mounting wave of interest… or obsession, perhaps. After all, numbers have risen in the last decade, according to Anderson, who points out that “a staggering 850 books about the Third Reich were published in 2010, up from 350 in the year 2000.”

Anderson, wondering if such fascination is “necessary to understand the workings of a deranged mind,” also cites “something bordering on hero worship” and that the potential for “some form of Nazi fetish” could be at play here, emerging like a serpent time had forgotten from beneath the doldrumous surface of a placid, stagnate lake. Is this really the case? Or, perhaps, with time and distance separating us somewhat from the horrors of war, do people now feel more comfortable having frank discussions about the wicked atrocities perpetrated by the Nazis? One might even argue that such sentiments even embody an odd sympathy for their culture adopted by some, which, perceived as a moment in time, shows the Nazis as people forced into a kind of extreme nationalism as the byproduct of economic turmoil… thus resulting in something horribly corrupted; an unethical regime whose outward and self-imposed dehumanization revealed the darkest elements of the human soul.

True, the mystery here is of certain intrigue, and few could deny that one of the elements that bears such a forbidden attraction is the occult aspect present here, and how it related to the Nazis and their growing mystique. According to Oxford Historian Nicholas Goodrick-Clarke, fascination with Nazism has been around far longer than Clive Anderson recently expressed to the BBC, and in truth, this fascination alone may serve as the genesis for belief that occult interests were underlying the Nazis. Ideally, Goodrick-Clarke expressed in books such as Black Sun that notions of a “Vril Society” and assertions of conspiratorial manipulation of the Third Reich by unseen “secret societies” are almost wholly imaginary. However, there are a few occult and pseudoscientific elements that do manage to permeate the Nazi mythology.

Between May 1938 and August 1939, a German scientific expedition was led into Tibet by Ernst Sch