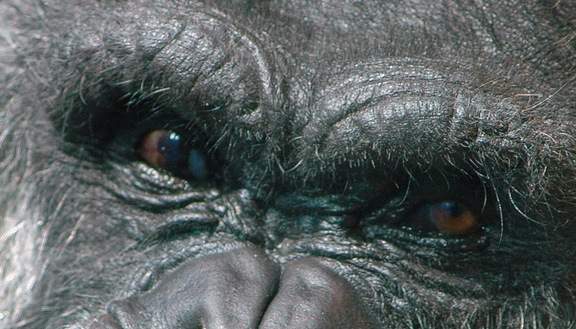 It was approximately 10:30 this morning while traveling into the high mountains of North Carolina, following an impromptu but unrelated interview with local Asheville news station WMYA My40, that I received the news: “Knobby,” a name given to a Bigfoot-like creature seen in the region, had allegedly been spotted yet again.

The story is accompanied by footage, taken by a Mr. Thomas Byers, who allegedly filmed a “creature” as is hobbled across Golden Valley Church Road in Rutherford County, North Carolina, on March 22. Below I’ve included that footage, for your enjoyment and analysis:

As can be seen above, the alleged “creature” appears to make some form of gesture toward the camera. Is this some crude attempt at communication? An omen, perhaps, of things to come? An effort on behalf of a dexterous actor donning a gorilla costume, trying to keep a loose-fitting suit of fur from falling off his lanky frame? The videographer included these comments along with the uploaded video at YouTube:

On the evening of Tuesday, March 22, 2011 while driving down Golden Valley Church Road I and a friend Carolyn Wright observed the Big-Foot Knobby or one similar to it cross the road in front of the truck we were in and run into the woods. It came from out of the field from the direction of the creek and we later took photos of feet prints in a freshly plowed field. I jumped from the truck and took this video of it as it crossed the road in front of us. At one point in the video it made a snarling growling sound and looked back at me. I also shot the other video posted with this one while I and my friend Carolyn Wright were trying to see where it went to. I heard it breaking branches as it ran out of my sight into very thick brush. If you listen to the other video you can hear me and my friend talking about what just happened in front of us. You can watch and listen to me and my friend talking in the below video.

Area news station WCNC out of Charlotte, NC, shared the following of the precarious footage: “Did we air the video? Yes. Do we know what