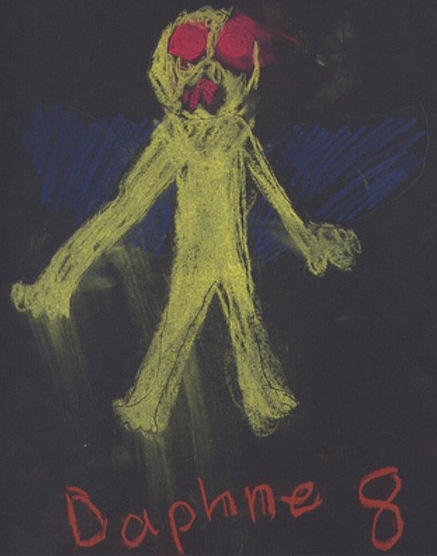 The creepy imagery that has become popularly associated with Point Pleasant’s infamous interdimensional/cryptid/alien/science-experiment-gone-awry, The Mothman, prevails in some strange places. We’ve seen it in books, film, and art, especially that of the late fantasy painter Frank Frazetta; but weird depictions that remind us of the winged one’s fluttering have even appeared in elementary school scribblings, too.

This article was brought to my attention some time ago, and while researching Lovcraftian lore last night (a theme which could in itself constitute an entire separate category at this site), I stumbled across it again and thought I’d share it here, since a few of the images–all of which are very interesting, considering their dark depictions, as well as the ages of the artists who rendered them–seem to bear similarity to one of our favorite cryptid monstrosities.

The Monsters of H.P. Lovecraft’s Cthulhu Mythos, As Drawn By Children

The idea for having kids visualize Lovecraftian themes through art belongs to David Milano, a teacher and blogger who “ran an art project for a children’s choir in the weeks before Halloween where he told them abbreviated versions of Lovecraft’s Shadow Out of Time, At the Mountains of Madness and (of course) The Call of Cthulhu.” Milano notes of the project that “I pitched the idea to them that since it was getting on to Halloween how