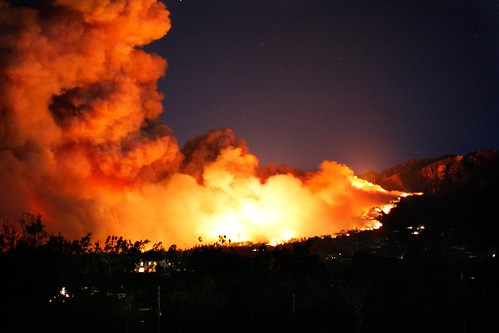 Fires that have ravaged Russia this summer in midst of tremendous heat, having even prompted Prime Minister Vladimir Putin to take action fighting the deadly blaze, have finally begun to subside. But the widespread destruction, in which an estimated 25 percent of the country’s crops have been reportedly destroyed, has caused some to question whether there is more taking place than just record heat: one scientist even thinks the cause of the fires was man-made, but not in the way accepted by conventional modern science.

Deputy director of the Strategic Culture Foundation Andrei Areshev has been catching heat in midst of his assessment of the blaze, which he says was not caused by global warming, but by a “climate change weapon” capable of projecting atmospheric extremities on other parts of the globe. “At the moment, climate weapons may be reaching their target capacity,” Areshev wrote in a recent article, “and may be used to provoke droughts, erase crops, and induce various anomalous phenomena in certain countries.” Areshev seemed hesitant to endorse his previous statements when questioned in a subsequent interview.

Temperatures this summer in Moscow have registered well above 100 degrees Fahrenheit, topping at 104 last week. Crops, as stated previously, were badly damaged in the fires, and other economic fallout associated with the disaster have caused great concerns among Russians. According to a report by the Russian emergencies ministry, nearly 200,000 hectares of land were burning when the fires were at the peak of their devastation, though at present the situation has seen tremendous improvement. Still, there have long been suspicions about a military project used by the United States to control weather, namely in other parts of the world for causing economic duress.

Alaska’s High Frequency Active Auroral Research Program, better known by its acronym HAARP, is a special project jointly operated by the US Navy, the Air Force, the University of Alaska and the Defense Advanced Research Projects Agency. The stated objective of HAARP is to enhance radio communications and surveillance systems through study of the ionosphere, but controversy has surrounded some of the methodology used to do so. For instance, some of the HAARP program’s various experiments have been believed to be capable of causing strange atmospheric phenomenon which might be similar to reported UFOs. However, most famous of all the suspected theories involving the HAARP program are the implications it may have on influencing weather; some conspiracies exist which tie HAARP directly to disasters such as Hurricane Katrina.

Russia is not the only nation to have been wary of U.S. government research causing what have appeared to be natural disasters. In 2008, earthquakes that occurred near Sichuan, China, as well as past earthquakes in Afghanistan, which harbors terrorist enemies of the U.S., have become targets for speculation among conspiracy theory advocates. Additionally, members of the Venezuelan media accused the HAARP program of causing the Haitian earthquake earlier this year, to which the United States subsequently began providing tremendous (and costly) relief efforts. Had this been the case, it might seem odd that the U.S., in midst of a recession, would no-less funnel altruistic aid and relief in untold amounts of cash to those affected in Haiti.

And yet, there are grounds, scientifically and historically, for this sort of thing to happen; potentially at least. Famed inventor Nikola Tesla had spent years researching earthquake generation in fairly localized regions, using pneumatic devices that would cause a resonant frequency capable of evoking tremors. This has long been one of the believed areas of focus undergoing regular study at the HAARP facility. However, the popular television program, MythBusters, took the idea to task by building small resonant devices from modified jackhammers. Fitting the devices to a large truss bridge, the resonance did manage to produce a vibration that was noticeable as far as 100 ft away. The bridge did not collapse, however, and the MythBusters team noted “Tesla