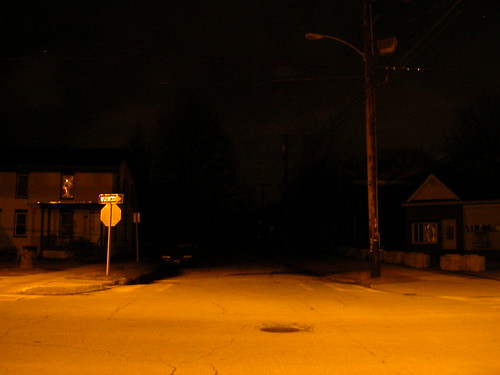 It often takes place at night, when you’re alone, apprehensive, and the air is slightly chilled: perhaps you’re walking home, and as your step quickens, you can’t help but want to glance over your shoulder… just in case. As you round the corner, you head down the darkest stretch of sidewalk on your journey, anticipating the worst. Just a few more blocks, you tell yourself.

As if on cue, the primary streetlight that shields you from a blanket of darkness blacks out. Now you’re more terrified than ever, and the loud noise of something moving behind you causes you, almost without thinking, to break into a run. As you jog along several more streetlights black out as you approach them. What the hell is going on?

For years, many individuals have claimed that under similar circumstances individuals have wandered alone, particularly at night, along streets where this sort of scenario occurs. Is there really some biological function of the mind–or perhaps even a strange extension of the inner-self–which can cause streetlights to black out in such a curious way? According to Hillary Evans, prolific author and divulger of all things dark and strange, this is exactly what is occurring… and more individuals remain capable of the odd gift of SLI (Street Light Interference) than probably are aware.

In SLIders: The Enigma of Streelight Interference, Evans details a worldwide phenomenon for which there are essentially no prominent consistencies among personality types or physical characteristics to which parallels may be draw, yet which seems to occur regardless. Exploring everything from bizarre varieties within the condition itself, to the curiously unique variations in which the phenomenon occurs (including length of a streetlight outage, as well as potential projections if it is indeed a manifestation occurring from within individuals), to even altered states of consciousness that may affect the phenomenon. Evans even makes allusions to SLI phenomenon occurring when the mind is in a state of distress, similar to one dropping things or becoming clumsier while in a flustered state. At one point, Evans even recalls a psychologist from Great Falls, Montana, who described how lights he passed beneath while driving home from his girlfriend’s home would black out, almost invariably, coinciding with evenings when the couple had engaged in passionate arousal. Could the vast variety of differing emotional and mental states available to the human mind literally cause such interactions to occur, or is it simply a coincidence?

As a writer and avid reader of books that do tend to fall on the more technical side of the proverbial fence, one welcoming quality about Evan’s book that I found in particular is the almost “comfort-reading” it provides through the recollection of a variety of collected accounts and stories throughout the text. In doing so, Evans evokes a story-telling element somewhat reminiscent of the styles of greats like Clark, Steiger and Sanderson; but with his diverse experience and long-held interests in Fortean subjects, Evan’s own unique style emerges with vibrant character and the familiar contemplative nature of his previous works. Though managing to capture the reader’s mind with his tales, there remains very much to be explored with regard to SLI phenomenon, to which Evans at one point pauses to describe as “a rogue force, a loose cannon, neither understood or controlled.”

Perhaps this is indeed the case, and to attempt to tame or understand the skittish nature of the SLI mystery would be like hoping to capture one’s thoughts in a jar. If nothing else, the strange phenomenon that is Street Light Interference will now be brought to a wider audience, thanks to Evans, and many who may have even experienced it themselves over the years, in the absence of knowledge that it happens almost constantly the world over for many, many others, will be freed from having to continue wondering in solitude of thought and action. The mystery of this phenomenon will continue, but the clear analysis Evans brings with the release of SLIders: The Enigma of Streelight Interference places it in the open, aimed at a promising future of study and understanding by future generations.

2 Replies to “Book Review: SLIders: The Enigma of Streelight Interference”