Book Review: Redfern Takes on “The Real Men in Black” 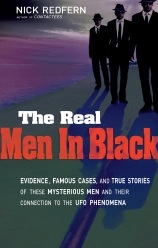 The kith and kin of the UFO are a strange and varied bunch. In addition to the wonder and curiosity associated with flying saucers and supposed visitations by beings from space, there are also a few rather terrifying elements that are present throughout various UFO lore. These might involve claims of victims who describe otherworldly encounters with beings, where they are abducted and subjected to bizarre examinations aboard the advanced airships of the UFO occupants. But some reports of UFOs have even more strange and frightening occurrences that follow the initial sighting: these involve the infamous “men in black suits” who have so often appeared to taunt and terrorize those claiming to have had such encounters. For those who have met the alleged MIBs, this experience can often be far more terrifying than coming face-to-face with any actual extraterrestrial.

And yet, this area of the UFO mystery, save the references usually given within books devoted to the greater body of UFO lore in general, have hardly seen any introspective and focused treatment of their own. Thus, much like the Contactees of past decades were finally treated to a showcase of their own inherently bizarre nature, the astute Mr. Nick Redfern (probably an MIB himself, all things considered) has returned to provide such a narrative for these vile and nefarious plainclothes men who harass the UFO witnesses in his latest offering from New Page Books, The Real Men in Black: Evidence, Famous Cases, ad True Stories of these Mysterious Men and their Connection to UFO Phenomena.

I imagine, knowing what I do of the MIB mystery, that this book may be unsettling for a number of readers out there, since this often overlooked element of the UFO enigma is finally treated to utter clarity and in-depth coverage, with both the conventional and “historic” reports and studies being reexamined (we see a nicely executed survey of Albert Bender, the creep who served as editor of the saucer-oriented Space Review newsletter in the early 1950s and, arguably, the first to be harassed by alleged MIBs), as well as reports from giants in the field of Ufology. Among these are Brad Steiger, who tells Redfern of his own unique encounters with apparent MIBs beginning in the 1960s, as well as stories from researcher Colin Wilson, author of Edward J. Ruppelt’s biography Flying Saucers Over the White House, who tells of meeting a strange and mysterious “Mr. X” in the 1980s which, he believes, was none other than an actual MIB.

Encounters of the weird kind aren’t relegated solely to decades past, however. Even modern researchers such as Marie D. Jones (a recent contributor to yet another fine New Page Books release on UFOs) have claimed to have encounters with these goons. But what are they? Are these shady characters government “spooks” who are working carefully to silence people before they leak their reports of UFOs to the media? This, of course, is something that may have become increasingly difficult with the advent of the Internet and the ability to disseminate information quickly to all parts of the globe (and ironically, one of the early progenitors of what would become the World Wide Web as we know it today was none other than Ufologist and computer scientist Jacques Vallee). On the other hand, maybe the MIBs represent some element of the UFO enigma themselves… could it be that these strange beings are actually denizens of the very UFO craft they appear to be so interested in?

In order to understand such possibilities, it has become paramount to reevaluate the information available to us, and hope to learn from the parallels that emerge. Fortunately, much of the busy work involved in such an undertaking has now been taken care of for us, thanks to Nick Redfern’s authoritative account of MIB encounters in a number of fields of discipline (and I must admit, even this reviewer has been mistaken previously for being an MIB, something Redfern takes time to mention in his book)! Thus, whether it be the sheer terror these strangers sometimes invoke, or the seldom incidents of hilarity that sometimes ensue following the appearance of weirdos too strange to understand, there is something for everyone bold enough to grab a copy of this latest offering from Nick Redfern. But be forewarned… should you investigate too deeply into the MIB mystery, you may just have to expect a knock at your door in the coming weeks, perhaps from a stranger clad in black who you’d rather not have to meet at all!

3 Replies to “Book Review: Redfern Takes on “The Real Men in Black””