Across the Occulted Orient: John Keel’s Search for Jadoo

Magic, according to the faithful, can be found in all the world’s little corners, given that the seeker in question is adept at finding it. Virtually every culture has sought to influence the course of nature with hope of benefiting from the miracles afforded us by the unseen; in the modern Western world, science and technology have greatly expanded such resources for our disposal. Elsewhere, more primitive cultures have employed rituals over time, in the absence of a more complete scientific understanding of their surroundings, with hope of appeasing gods, nature spirits, and elementals, whose pleasure might allow favor to shine upon humble human worshipers nearby.

Thus, the mysterious practice of utilizing supernatural techniques of controlling and fashioning natural laws comes into question, and with it the creation of magical arts, supposedly employed since time immemorial by only the most enlightened and adept among us. Again, we see that there is something of a separation between the Eastern and Western worlds that emerges here, since the materialism often touted in the West is presented as a means of explaining away all observable phenomenon as being in accordance with known (or soon to be known) scientific laws; the rest is the stuff of pseudoscience, or worse, the outright creations of overactive, and perhaps at times less civilized imaginations that remain ignorant to mankind’s long-sought mastery of the universe.

Still, perhaps there are remnants of “something else” which exist. These holdovers from archaic times often do invoke the notion of forces at work in the world around us that seem to escape the modern man of this new era in which we live. For instance, there is the supposed ability to travel outside the body, visiting places far remote to our immediate surroundings, and obtaining knowledge about people and places in the absence of any physical interactions we may have had with them. There are also the stories of mysterious creatures said to haunt the extremities of terra firma, which are believed by the modern man to be the stuff of mere myth and legend; and yet in some parts of the world, there is a persistent belief in manlike beasts that may traverse the deep forests and high mountains of Earth’s most remote corners.

Such things are indeed the stuff of magic… and thus, if one in modern times were ever to take these sorts of things seriously, where better to look for evidence of utter impossibilities than in the heart of the orient? And arguably, if magic–or Jadoo, as it is often called in the native Hindi–is the object of one’s pursuit, who better to go in search of it than a practicing magician? 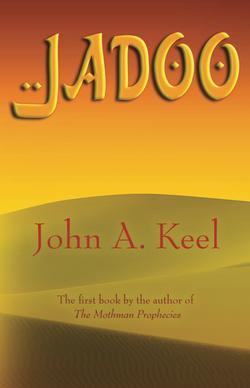 The story that unfolds within the pages of John Keel’s first published book, Jadoo, while less well-known by modern fans of Keel, involves no lost-and-then-recovered tome from Keel

6 Replies to “Across the Occulted Orient: John Keel’s Search for Jadoo”