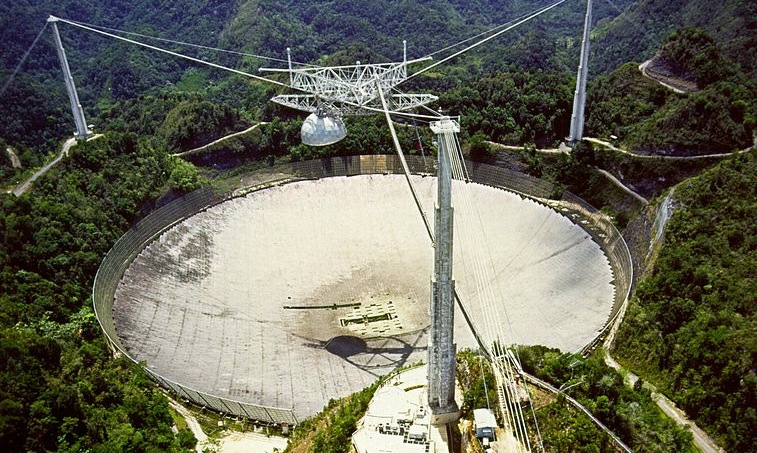 The Search for Extraterrestrial Intelligence (SETI) has long employed the hopeful use of radio astronomy in an effort to try and gather information about possible alien life elsewhere in space. Most of us are familiar, as a result, with gigantic radio telescopes and dishes, the likes of the enormous one at Aricebo Observatory in Puerto Rico (pictured above). But like any other conversation, even one of the interstellar variety must go two ways for it really to qualify as being “communication.” Hence the earlier acronym CETI (Communication with Extraterrestrial Intelligence) was changed to the more passive name that merely implied a search for beings out there that may be like us.

In the event that a signal or response were indeed ever received, opinions are wide and varied as to what it might entail, and how any information gathered from such signals should be utilized. In his famous novel Contact, Carl Sagan imagined a message that enclosed blueprints for a device that would allow full-blown contact between beings from different parts of the galaxy. And yet, while this potential could be as likely as any other in the grand scheme of all things relatively unknown, there may be darker interpretations just as well.

My upcoming book, The UFO Singularity (New Page Books, 2012) touches on this subject later in the manuscript, where I refer to the supposed “soul hacking” abilities an invasive extraterrestrial species might employ, perhaps in a parasitic way, if contact were indeed eventually made. My Russian colleague Alexei Turchin, a transhumanist thinker who analyzes risk potentials for humanity using Bayesian logic, provided a number of ideas in this regard; chief among them was the potential for humans “downloading” harmful technologies through active SETI communications (I refer to this as “interstellar spam”).

While it’s an obscure concept, I have managed to find a few others that express similar worries about the future of such things stemming from our SETI programs. An interview with SETI experts Andrew Siemion and Milan Cirkovic that recently appeared at i09.com delved into such possibilities:

“Our instruments are connected to computers, and like any computers, they can be reprogrammed,” he warned. “Our software receives input that ultimately comes from unknown sources, and again, while this input is never executed or decoded, we don’t perform rigorous checks to validate this unknown input like a computer security conscious programmer might do with an internet application.”

In other words, the technology we use for receipt and study of interstellar messages may indeed become subject to dangerous “interstellar spam bots,” in a sense, which could present an entire host of potential dangers for humankind. The truth of the matter is that, quite simply, we just don’t know what different sorts of potentials might exist… and therefore, while scientists like Stephen Hawking have discussed the dangers associated with physical visitation from alien beings, we may indeed still be at risk, even in the event that no ET intelligence ever came close enough to so much as enter Earth’s atmosphere! We’d better just hope that any aliens who do seek to fulfill our eternal quest for “contact” end up being good natured.