A Thesis on Alien Life: Extraterrestrial, or Something Else? 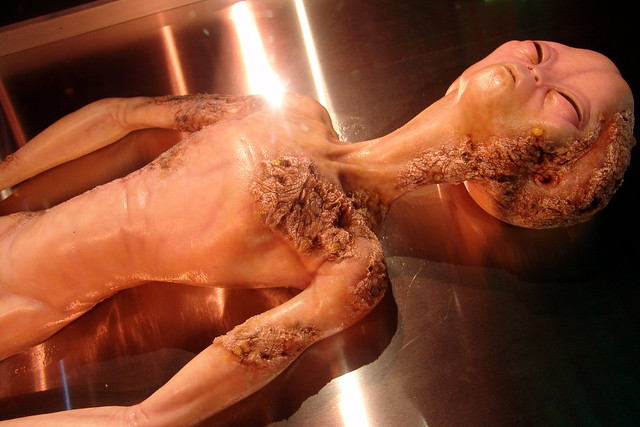 A Gralien Report reader recently asked me one of the most burning questions ever to have resounded off the cavernous walls of the enlightened human mind. It has torqued, twisted and troubled scientists and scholars for decades: Do aliens exist?

To be frank, it’s pretty hard to say… but I’ll frame the challenge this query presents by Socratically asking another question: With all the great minds that have come and gone, and presuming that they too pondered this question, do you expect me to be able to provide a better answer?

Alien life, most certainly, exists somewhere else in the vast expanses of space. It is far more difficult to speculate whether alien life is visiting Earth; therefore, for the scope of this argument, I’ll say I haven’t seen hard, convincing evidence of alien life forms visiting our planet. I have, however, seen plenty of evidence that suggests strange aircraft, some of which may be man-made, could be flying in Earth’s airspace.

This assumption, of course, brings up a couple of ironic questions all by itself:

1) Since I specified that only some of these craft could be man-made, where might the others coming from, or what exactly are they? For one, we can’t exclude the possibility that we’re dealing with a variety of natural phenomena, such as ball lightning or other plasma manifestations, when people describe seeing strange lights in the sky. By the same token, though physical travel through space seems fairly cumbersome, there is the possibility that “aircraft” people occasionally report seeing might actually be vestiges of something tangible from another dimension (i.e. “alien” craft which, rather than blasting through space at the speed of light, could be capable of warping space and appearing in our reality intermittently).

2) If I’m so unsure about the existence of “aliens” myself, why would I waste time writing about them on this blog? To be honest, I like to present this information to people and allow them to make up their own minds… but that doesn’t mean that I “buy it” myself, just because I present it here. I once had a chance to speak with Daniel Cohen, a prolific author of books on the paranormal (very popular, even today, in school libraries across the country). Cohen professed that, while he had made a career writing about strange phenomenon, he classified it as “folklore,” and kept an open mind, but chose not to believe everything he committed to paper. Instead, he allowed his readers to form their own opinions.

One final point here: Again, though I’ve said I haven’t seen convincing evidence that we’re being visited by extraterrestrials, does this exclude the possibility that there are other entities people sometimes encounter which aren’t from space? Not at all! The late Mac Tonnies wrote an excellent book called The Cryptoterrestrials that offered the theory that many “alien” encounters aren’t with aliens from space, but aliens from Earth (sadly, this was his final written work). As we gain a better understanding of science and, in particular, physics, we may also be able to open our minds more to the possibility that interdimensional rifts in space and time could account for the strange UFO sightings, as well as a variety of other odd occurrences that take place here on Earth.

Finally, there is the notion that “aliens” are accessible primarily through our own minds. This isn’t to say “aliens” are imaginary, per se, but that “they” could be representative of a non-physical intelligence that is somehow interconnected with the human psyche. For more on that theory (which my research pertaining to the psychological aspects of Fortean phenomenon has led me to accept as a distinct possibility), I must recommend my book Magic, Mysticism and the Molecule: The Search for Sentient Intelligence from Other Worlds.

Happy alien hunting, and as always, feel free to submit your own reports by commenting at the bottom of this page.

4 Replies to “A Thesis on Alien Life: Extraterrestrial, or Something Else?”