Secret Lives: Will Salt Water on Mars be a Game-Changer? 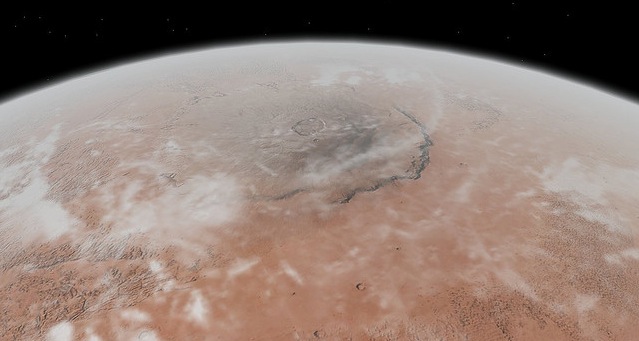 Recent news that water may have been discovered on Mars (again) has stirred interest in the age-old debate about whether life may exist on our great-big red neighbor next door. “At a press conference yesterday, scientists announced that they may be one step closer to determining whether water–an essential ingredient for life–exists on Mars,” a wire press release read yesterday. The Washington Post’s Marc Kaufman additionally noted that this was essentially a game-changing discovery (if water is indeed what has been discovered), and that it may be “our best target yet for finding possible life beyond Earth.”

Well, if you’re looking for life that’s anything reminiscent of how living organisms here on Earth evolved, these might be logical ways to go about finding them. Meanwhile, a plethora of other organisms–some so strange we might only be able to call them “life-like” by our standards–could exist elsewhere. Too bad, then, that mainstream science doesn’t seem too concerned with thinking far enough outside the box to come to new understandings of where such conscious–and even sentient or intelligent–organisms might exist.

Of course, this kind of unconventional approach isn’t exactly what’s considered “the high road” among the mainstream intelligentsia out there. Poor John Keel lamented about this back in the ’80s, when sales of books that dealt with UFOs and other fringy material were seeing sharp declines. Indeed, UFOs and strange phenomenon, as well as the potential for understanding our universe in unconventional ways that such interests tend to promote, are sometimes interesting to the public at large. However, they far less often taken seriously, no matter how entertaining they may tend to be.

Another thinker out there who has recently criticized the “good ol’ standard” approaches science so often engages when it comes to studying the potential for life out there is Chris Holly, who posted the following at her blog recently:

The area of UFO’s and aliens–much less the working of the universe–is without question locked out due to our limited thinking. Let’s be honest and face the fact that if we had any idea how this universe worked, we would be out there part of it. We are simply little beings just starting to reach past our own noses with little-to-no real understanding of the space around us.

It gives me an enormous belly laugh when I read the long, boring, ongoing words of those who feel they are our top experts on what goes on past our little planet. Constantly, the only