Fowl Language: Do Some Birds have Comprehensive Communication? 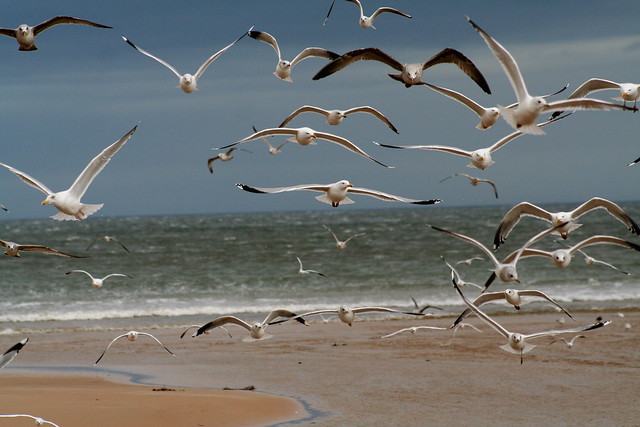 Have you ever thought that relatively advanced communication among animal species could be possible, or is the idea really just for the birds? Either way, you’d be right, as illustrated in the following guest-contribution from TGR correspondent Matthew Oakley, who is already familiar to many readers here for his work each week as engineer of The Gralien Report Podcast.

In 1963, Alfred Hitchcock bestowed upon the world his unsettling psychological thriller The Birds. Based on a short story by acclaimed author Daphne du Maurier, the film portrays the decimation of a small island’s populace by birds. The film is a classic, and a must see for any film lover, as well as anyone with a true sense of imagination regarding the realm of possibilities existing beyond our known world. The idea that something so seemingly harmless–like, for instance, a flock of birds soaring through the sky–could at any point turn on us for the worse in such a way is terrifying, to say the least. And still, though based in science fiction as this story is, there may actually be real world evidence too that would entertain the idea that events like these could in fact occur.

For years now we have known that the American crow has a number of unique abilities that include recognizing human faces, specifically those that they can associate with danger or bad situations. Within the last few years, research also seems to show that not only do these birds have the ability to recognize us, but that they can even communicate their perceived ?bad vibes? about us to others of their kind. Research conducted by zoologist John Marzluff several years ago involved experiments where he and his research team would trap, mark and release small groups of crows at different locations all over Seattle. When the researchers were initially capturing the birds, they adorned different masks for each location. As the small groups were being caged, other crows in the area would circle the team and cry out as if sounding an alarm. The team began to notice that if they wore a neutral mask upon visiting the site, as opposed to one with defining features, the crows would not react, however when the masks with the defining features were worn, as in the initial visit, the crows would sound their “alarm,” or even attack. Marzluff’s research began to show that more and more of the American crow populace in the area began to recognize the masks, even away from the sites where the crows were initially taken. Marzluff claimed that at one point it had been a year since he had worn the mask in front of the crows, and yet they still recognized it. Similar experiments have been conducted in South Korea, which have begun to reflect the same variety of results among magpies.

Another interesting set of results has been released recently in Nature Neuroscience magazine. These tests are showing that Society Finches may sing according to a developed set of grammatical rules. Until recently, scientists had believed that syntax was something that had only been developed by humans and some species of whales. Two biologists at Kyoto University in Japan began to test their theory of bird syntax by playing four songs that the birds were not familiar with, until they were able to get used to the songs. Once this process was completed, the biologists remixed the songs by changing the syllables, and played them back to the birds. Ninety percent of the birds being tested reacted strongly to one of the four “new” songs. The next part of the experiment was to play the remixed versions of the songs to birds that had been raised in isolation. The scientists wanted to see if this understanding of “grammar” was learned, or instilled with the birds from birth. Once the isolated Finches were introduced among the ranks of the other birds that had been displaying signs of syntax, it only took the isolated birds two weeks to pick up on the grammar usage of the initial test group. This seems to indicate that there was indeed an ability to communicate displayed by the two groups, in that the initial test group was able to “teach” the group that came from isolation the correct grammatical rules within a short time.

So could the far out ideas Alfred Hitchcock proposed in his film forty eight years ago, where birds were able to communicate on a more sophisticated level than humans realized, actually be close to hitting the nail on the head? Granted, to say that birds are likely to go on a murderous rampage is probably too far fetched for most of us, but the proof of more sophisticated communication between several avian species is interesting nonetheless. Fifty years ago the brilliant linguist and political analyst Noam Chomsky theorized that certain grammatical rules are easier to learn because we, as humans, are genetically pre-disposed to adopt them; but are we really the only ones within the animal kingdom with such predispositions? Language and communication is the centerpiece for any successful society, and such results may indeed point us toward the realization, however hazily at times, that our species may not be quite so unique as we think we are. Just how far, exactly, has the evolutionary chain brought us, and how far would other species here on Earth eventually have to come before they too might stumble upon the same sorts of linguistic tricks that resulted in a comprehensive language like ours?

9 Replies to “Fowl Language: Do Some Birds have Comprehensive Communication?”