Awaiting an Apollic Apocalypse: When Earth’s Sun Goes on the Attack 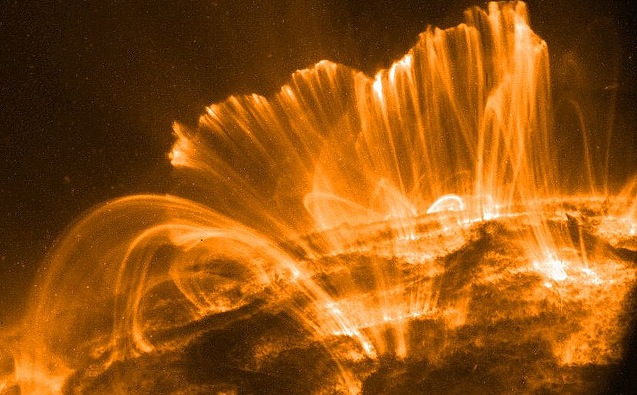 Can you imagine how you’d exist in a world without any electricity? Consider the following scenario: you walk outside one morning, and realize you’ve overslept because your alarm didn’t go off. In fact, your alarm wasn’t even on, because there doesn’t seem to be power in your neighborhood. But something else is amiss here; there’s a deadly silence in the air. You realize there are no sounds of horns honking or the steady hum of traffic on the roadways nearby… just the distant chattering of frantic voices. You go back inside to call a friend, or a family member, just anyone… but your cell phone won’t turn on either.

If this were you, would you have begun to feel the creeping panic of knowing that the entire world had apparently been shut off, as simply as switching a great master switch? The really frightening thing about this scenario, however, is that it could actually happen.

I’ve harped on this for months now: the notion that catastrophic solar activity, expected to begin increasing by 2013, could endanger not only our electrical infrastructure, but could also potentially threaten existence as we know it. Sure, this might sound like an extreme position to be taking, especially since there are studies that show that many of the harmful effects of EMP–that is, electromagnetic pulse attacks that could occur either as a result of acts of war, terrorism, or those which could occur naturally via the sun–may not completely cripple civilization as we know it. But is this a risk we can safely take?

An Associated Press article recently discussed the potential risks associated with solar storms and their resulting EMP effects, quoting NOAA Assistant Secretary Kathryn Sullivan, who warned that by 2013 Earth could be seeing major climatic changes. Other sources have warned that this could be the case, with the effects ranging from power outages in scattered areas for periods of a few weeks, to even potential lock-downs of the electrical grid spanning most of the world. Over a period of just weeks, in the absence of electricity to furnish refrigeration, power to pump gasoline into cars (at least those vehicles which didn’t contain fragile computer circuitry that may have been compromised), and the ability to communicate with loved ones over distances, the world as we know it could change drastically. Would you be prepared, in the event that such a catastrophe did take place?

At present, it is still a matter of debate whether the harmful effects of EMP–either solar or manmade–could elicit the sorts of doomsday scenarios outlined here. However, history has shown that such things could have occurred in the past, specifically in the days before electricity was in use. Even ancient societies seemed to have known of the Sun’s potential ferocity; perhaps this is why a god of war like Apollo (hence my reference to an “Apollic Apocalypse” in the title of this posting) was to be dubbed a sun-god in later literary sources. But for the here-and-now, the best way to cope with the potential threat today is to learn about it, and prepare for disasters of any kind to the best of our ability. Knowing the recent history of response time to disasters (think about FEMA in the aftermath of Hurricane Katrina), it may be up to civilians to aid in recovery should anything as tremendous as some of the proposed “EMP Apocalypse” scenarios occur.

For more information, you can visit any of the following links:

4 Replies to “Awaiting an Apollic Apocalypse: When Earth’s Sun Goes on the Attack”