Lurking in the Darkness: Black Eyed Beings of Old (and Owl) 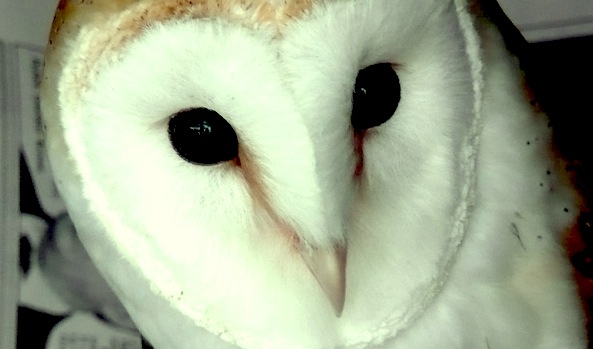 One of the more terrifying and strange aspects of Forteana and the unexplained ongoing today relates to the stories of so-called “Black Eyed Children.” Indeed, this subject has seen a lot of press in the last few years, thanks to writers and researchers like Jason Offutt, Nick Redfern, and a few others. However, despite the appearance of often being a more recent phenomenon, there are also many aspects of this ongoing mystery that have associations with much earlier times. One researcher who has begun to draw such parallels to earlier reports of beings with hollowed-out or blackened eyes is Gralien Report correspondent and resident “Historian of Obscurities” Vance Pollock.

“The terrifying image of the black-eyed children first called to mind an encounter sometimes related to episodes of astral projection or out-of-body experiences,” Vance writes. “I have two accounts written by authors who both lived at some point in Asheville, North Carolina,” alluding first to none other than William Dudley Pelley, a radical Nazi supporter (who eventually served time in prison for speaking in favor of the Pearl Harbor Bombing) and prominent figure in the early twentieth century spiritualist movement. Indeed, what Pelley describes sounds very similar to a black-eyed being of the modern era, though the circumstances under which the encounter took place are far stranger even than those weirdest among the conventional reports today.

The excerpt in question, appearing below, is from Pelley’s Seven Minutes in Eternity with the Aftermath, where Pelley describes a momentous spiritual encounter that occurred during an out-of-body state that comprises the entirety of his book:

In that mortally discarnate state myself, I encountered the soul of a living person that had become released by normal sleep and was wandering in that Land of the Leal without knowing that it was there! It would awaken on the morrow totally unaware of what it had done during the night. And greeting it as I did, in the form that I did, showing me its true character nakedly, so horrified and shocked me that I ran from it. As I ran, it followed blindly, not unlike a nightmare, a creature with no eyes!

I understand now what it was I saw, and why I saw it. I had called it to me by a subconscious process too complicated to enter into here. But running from it, I stumbled and fell as it was almost upon me in nightmare obsession.

Curious indeed. Could Pelley indeed have been describing a sort of out-of-body experience, during which he encountered none other than one of these archetypal black-eyed beings? “The next incident, while not as specific as to a physical being with hollow eyes, is similar in tone and effect,” Vance notes of the following excerpt from Sylvan Muldoon’s The Case for Astral Projection: Hallucination or Reality!:

Mr. Wills tells of consciously projecting to his sister’s home in England, while, “at the same time I knew that my physical body was in bed in U.S.A., and to prevent my instinctive return before I was ready to go, I kept saying to myself: ‘Steady now, it’s all right. Let us see what we can find out.’ I walked out of the bathroom, into the bedroom where I used to sleep and wandered about… I walked along the corridor a short distance where I was stopped. Flesh-like arms were barring me from going further.

“I could not distinguish who it was, but tried to push those arms out of the way. My own arms seemed to merge into and become a part of those which were barring me, though at right angles. I was greatly irritated at this and pushed and protested vigorously… In the struggle I became unconscious.”

“These incidents date to the late 1920s,” Vance says. “One modern interpretation of the latter encounter runs as follows,” citing H.F. Prevost Battersby’s Methods of Astral Projection and Psychic Certainties:

Many projectors are conscious of some power outside themselves which occasionally constrains them, and which they may be inclined to assign to a spiritual entity.

In a sense that may be true; but such potency is, I am persuaded, merely the spiritual component which is, in life, never a completely incorporated, though integral, part of ourselves, known to Kahuna wisdom as the aumakua, a super-conscious entity, which has only a psychic attachment to our terrestrial consciousness, and is probably the source of warnings which are often referred to guardian angels and other disputable sources.

Mr. Wills probably made contact with his aumakua when [describing a set of barring arms merging with his own]. They doubtless were a part of him.

What can be made of such reports, and what is their particular relevance to the strange “black-eyed beings”? Interestingly, Pollock sent along more information about the aumakua mentioned toward the end of the last excerpt, which are essentially familial “gods” or ancestor spirits in Hawaiian traditions. Interestingly, the aumakua are known to manifest in various animal forms; in particular, the owl, another black-eyed creature often rife throughout reports of the strange and unusual. That said, the relevance here regarding owls and Forteana goes almost without saying: the presence of the large black eyes of owls peering in windows at people in the evening is commonly associated with Ufology and alien abduction (Whitley Strieber reported this phenomenon in his book Communion). We also see owls used as a symbol of knowledge or wisdom, with the birds present in the symbology associated with secret societies like like the Bohemian Grove gatherings. Owls are also known–much like the aumakua themselves–to represent omens, both for good and for ill, with many traditions holding belief that the presence of an owl calling at night may be a harbinger of death.

This hasn’t been the case, fortunately, for researcher Mike Clelland, who has gone into great detail at his Hidden Experience blog to detail his various encounters with anomalous owls. You can read Mike’s “Owls at Sunset” story by clicking here.

Are these curious incidents related by Pollock indeed evidence of reports serving as precursors to the modern phenomenon known as “Black Eyed Children”? What is it about the stories of ghosts, alien beings, and other manifestations that places the entities in question in such a curious–and frightening–archetypal predisposition… and a sort of form which humans tend inherently to equate with evil? The bad luck or “omen” orientation here also begins to lurk among the denizens of my ongoing “Fortean Folk Devil” theory, which draws a number of parallels between observed Forteana and disasters or bad luck that often follow. Here again with black-eyed beings, we begin to see so many overt parallels that they begin to become difficult to number. What are your thoughts about this phenomenon? Are black-eyed beings a real phenomenon, or are they one aspect of the human experience that occasionally extends from within ourselves, managing to taunt and terrify us?