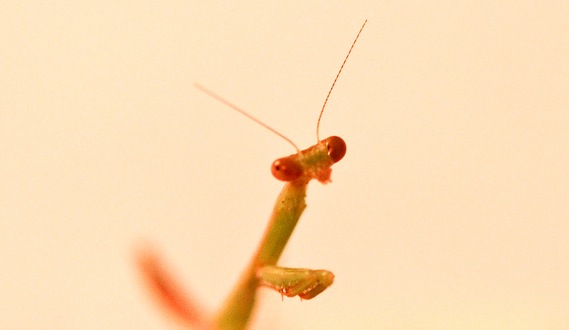 Read aloud, the title of this post may seem slightly provocative, and upon further reading, for many it may constitute outright silliness, as what we’re dealing with here has primarily to do with insects and Forteana. Reports in this category range from synchronistic occurrences involving insects, to the literal appearance of so-called “Mantis Men” in concurrence with UFO abductions and altered states (there are even a few reports that divulge these creatures appearing under rather normal circumstances). But what prompted the notion of focusing on this weird subject here actually stems from what otherwise might have been an inconsequential experience of my own, which occurred only a few days ago.

As the summer heat begins to rise here in the Southeastern U.S., a tandem phenomenon will begin to also occur, especially in countryside homes like mine: the appearance of pesky little ants and other insects. Already this year, I’ve had to squelch the plans of wasps and hornets that began nesting from the roof above my porch outside, as well as a few woods spiders that have created their webs around the corners of my office. But the ants have probably been the worst issue, since they have just appeared in droves. One evening I returned home to find a steady line of the pesky insects, having entered through a tiny opening in the wall beneath my bedroom window, that led all the way across the room, into the kitchen and all the way to the sink. Here the line diverged in two directions: one toward the small porcelain container I use to keep sugar for coffee, the other toward the trash can. A short skirmish ensued, and I have managed to keep the minute intruders at bay for the most part ever since.

There are still the occasional ants here or there that manage to get inside, especially around the bathroom sink, which seem to enjoy the exercise they receive as they run up and down the wall, stopping for an occasional drink around the faucet below. One of these little guys was caught in the act the other day, and as I attempted to brush him off the wall, the ant managed to scramble into a tiny recess between the edge of my shower and the wall by the sink. I had been trying to get at the ant as he hunkered down in the recess, when I noticed it had stopped moving altogether; instead of scrambling about madly as it had done moments before, the ant now merely cowered, unmoving, concealing its legs with it’s body crouched tightly against the wall, antennae trembling.

Certainly, insects might sense a sort of “fear” that could be likened to what you or I would feel at times of danger. This is an evolutionary byproduct of our bodies learning to protect us, and all living creatures likely sense some kind of “fear” in the presence of a force that might destroy us. Hence, as I observed this little ant literally cowering in the tiny corner in the wall before of me, I found its actions curious in a way. The creature had initially attempted to escape being brushed off the wall, and now had merely hunkered down, as though bracing itself in submission for the inevitable. Needless to say, I chose to spare the six-legged intruder, accepting my own excessive compassion, given the circumstances (and perhaps more importantly, my perception of the given situation). Seems that the old adage, “he wouldn’t even hurt a fly” could almost apply here.

But more relative to the present notion of anthropomorphic bug-creatures, this experience reminded me of a few other synchronistic occurrences with insects. One of my favorites, described by author Daniel Pinchbeck in his book Breaking Open the Head, describes a similar encounter a friend of his had after a powerful DMT trip, where he met a praying mantis creature with