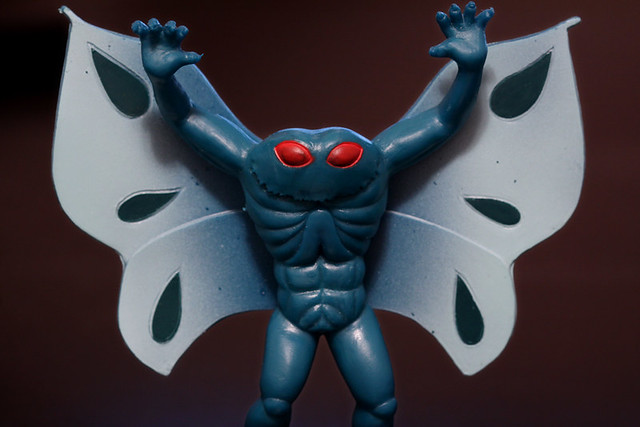 It is often said in Fortean circles that the mysterious appearance of the Mothman, a winged cryptid monstrosity that appeared in the vicinity of Point Pleasant, West Virginia in the late 1960s, was prophetic in nature. Traditionally, researchers have felt that the creature’s presence represented some sort of omen, warning of terrible things to come; specifically, the collapse of the Silver Bridge on December 15, 1967. Though the Mothman certainly isn’t the only winged creature alleged to exist in the realm of the unexplained, it is by far the most famous. Nonetheless, its cousins, reportedly seen at various times and places elsewhere around the globe, are also sometimes seen to be harbingers of ill fortune.

Philosophically, we might find trouble in the possibility that one instance could influence an entire community of beliefs; much the same as we would question whether chickens or eggs came first in the lineage of farmyard fowl, it is equally worthy of consideration whether the perception of misfortune associated with winged monsters is truly a cultural constant, or if it is merely one that has been infiltrated by the widely reported Mothman flap in between 1966-67. After all, since the creature’s strange appearance more than four decades ago, similar circumstances have been attributed to various other winged-devils in locales elsewhere around the world.

One of the lesser known, but potentially more revealing instances of this sort involves the alleged appearance of a large, winged creature around the Chernobyl reactor in the days and weeks before the disaster that occurred there in 1986. Various internet websites detail how strange phone calls, nightmares, and a host of other strange circumstances began to transpire among the nuclear plant’s employees prior to the accident. Additionally, reports of a gigantic black bird, its wingspan somewhere around twenty feet in length, had been seen also. This “bird” bore one curiously distinctive feature, however: it was described, much like the Mothman, as having either no head at all, or having glowing red eyes and a diminutive head with no neck that rested around what would be the upper torso area of a man.

As reactor vessel number four ruptured at the Chernobyl plant on April 26, 1986, a series of explosions occurred as excessive power levels surged within. Many workers, unaware of the deadly radiation in the smoke being emitted, would later die from complications surrounding their exposure. It was during this time that the individuals struggling to put out the fire in the damaged reactor allegedly witnessed the gigantic, headless bird one final time, as it escaped into the smoke-filled air above.

Much like the appearance of the Mothman in the weeks and months leading up to the collapse of the Silver Bridge, these supposed elements of the Chernobyl story seem to detail the presence of a nearly identical creature, as well as similar supernatural circumstances that occurred just prior to the tragedy in Ukraine in the 1980s. However, there is very little evidence to substantiate these claims other than that which, interestingly, became public knowledge around the time of the release of the film, The Mothman Prophecies, based on John Keel’s famous book. Did sightings of a giant, winged “monster” actually occur at Chernobyl, or did the Mothman story of Point Pleasant and, more importantly, film and media portrayals of those events, spark a series of urban legends involving similar disasters around the world?

This would not be the first instance where the Mothman story has been examined for it’s possible association with myths and urban legends. Author and folklorist Jan Harold Brunvand wrote in his book The Baby Train and Other Lusty Urban Legends that many elements of the original encounter in the late 1960s incorporated elements of traditional folk tales and urban legends, namely “My Boyfriend’s Dead,” in which a young woman whose boyfriend disappears to fetch gasoline for a stranded vehicle is found dangling from a noose above the car. “Unfortunately, the only written sources (on Mothman) are books for children,” Brunvand wrote, “or sensationalized and undocumented accounts of ‘mysteries of the mountains’ that fail to quote identifiable persons.” Brunvand’s theory at this point was that, although the stories may have been rooted in some actual occurrence, “the stories–whatever their sources–also incorporated existing folklore.”

Seeking further clarification, Brunvand also notes a response shared with him by a California school teacher, received from the Point Pleasant Chamber of Commerce, after she and her students sent a request for more information on the Mothman. There were several article clippings included in the package they received, as well as titles of books related to the mystery. Brunvan wrote, “The letter also mentioned books that I’ve been unable to locate titled The Mothman Prophecies, and They Knew Too Much About Flying Saucers.” Obviously, before he condemned the more credible Mothman reports as urban legends, Brunvand failed to read any further than the “children’s books” he cited instead (which often contain exaggerations or convoluted regurgitation of well-documented accounts), skipping right over the most authoritative sources on the subject.

However scant or unlikely reports of a similar paranormal circumstance around Chernobyl may be, evidence pertaining to the alleged Mothman flap of the 1960s in West Virgina presents a unique scenario where, after four decades, many of the key witnesses are still alive, or have appeared previously on camera to record their testimony. The body of evidence suggesting that something did indeed occur in the small town of Point Pleasant between 1966-67 is nothing short of staggering; but could it have had a further-reaching effect that did spawn fodder for urban legends, thus associating reports of winged beasts the world over with foreboding disasters? Or, as strange and remote as the possibility may be, could more of these “Mothmen” actually exist in some enigmatic form, for the purpose of warning us of future disasters?