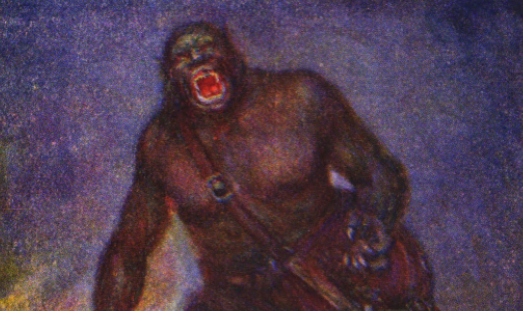 Perhaps no vile nemesis of any hero in classic literature is as renowned and studied as Beowulf’s legendary adversary, Grendel. While studying the famous battle between Beowulf and the aforementioned beast for a new book I’m spending time writing at present, I began to notice a variety of interesting parallels, ranging from associations between Grendel and his alleged descent from the biblical Cain (boy, this reminds me of another curious “Fortean Folk Devil” report divulged on this site just a while ago) to more modern reports of Bigfoot-like creatures in the United States, as well as part of Europe and abroad.

I won’t get to all of those right now, but in passing, there is one very striking similarity I’d like to address. It pertains to a classic rendering of Grendel that was procured by J.R. Skelton, an illustrator of children’s books in the early twentieth century (see above), and its similarity to a well known image of a purported “Skunk Ape” from the American Southeast. 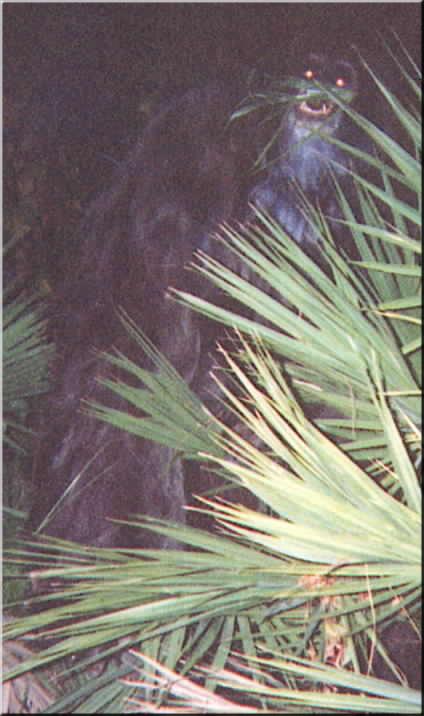 The case of the “Myakka Skunk Ape” is one that has fascinated us for years now. In a nutshell, the story dealt with an envelope received by the Sarasota Sheriff’s Department back in 2000, which contained two photographs (see image, right) and the testimony of a woman who, after three nights where she witnessed the creature raiding her back yard in search of apples being kept on her porch, decided to try and capture photos of the beast. The photographer, who chose to remain anonymous, seemed adamant that the creature had been “an orangutan,” and could be a danger to others in the area if left unattended. Without further comment, she left the photographs of the creature with officials, concluding her strange story and plea for help by saying “God Bless.” You may observe better quality images of the Myakka Skunk Ape by clicking here and here.

Indeed, it seems that Skelton’s depiction of Grendel bears a strong resemblance to reports of classic ape-men seen around the world, and though it may (quite obviously) be coincidence, I still find it somewhat intriguing with regard to the Myakka photos that both creature’s faces, as well as their strange, slightly hunched lean, and even the manner in which they tilt their heads backward and display their general ferocity, are so similar. It’s almost as if Skelton had dipped his paintbrush into the collective consciousness, and used the fertile paint that was our common archetypal representation of the “Wild Man” in folklore, as well as in modern scientific speculation, and applied it to his canvass with subtle strokes and brushes. Thus, his rendering of Grendel bears at least some similarity to what is perhaps one of the finest photographs of an alleged Bigfoot creature available today.

Well, at least I think it does. If nothing else, maybe the present comparison provides a little food for Fortean thought!

One Reply to “Grendel’s Grimace: Was Beowulf’s Beast a Bigfoot?”