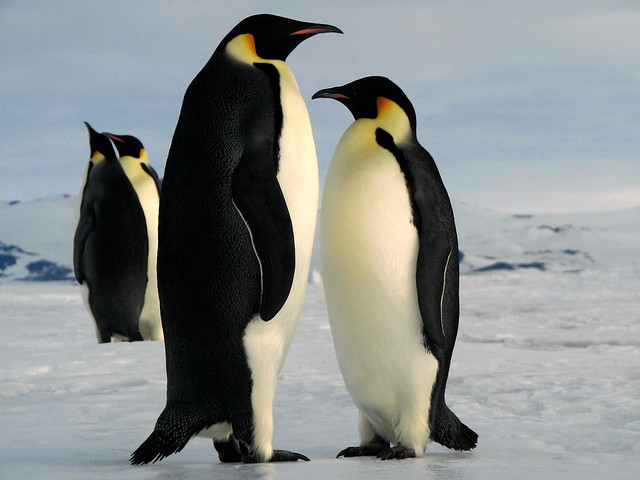 Among all feathery species of fowl that inhabit the Earth, the waddling penguins of the arctic are perhaps the least likely to strike fear into the hearts of men, let alone rank high on a list of potential cryptozoological wonders. There is good reason for this too, since there are few reports of large or otherwise anomalous circumstances that involve penguins; the biggest known species, the Emperor Penguin, stands at a mere four feet tall (actually, that’s fairly large, all things considered). However, new evidence of a fossilized penguin cousin discovered near the coast of Peru has painted a unique picture for archeologists and ornithologists alike, depicting a massive bird that, unlike its cold-weather cousins of today, lived in a tropical climate. And yes, it was very large.

This creature, called the Water King, stood a full foot taller than today’s Emperor Penguin (pictured above), at five feet when full grown. It’s unique size isn’t the only distinguishing feature the Water King had: much like young penguins, the enormous bird is also believed to have had a reddish tinge to its feathers, particularly around the breast and underbelly. Diving into the warm Peruvian coastal waters–which, by today’s standards, were much warmer at the time the Water King existed–the bird would capture fish with it’s seven-inch-long beak. Imagining such a creature, having once existed in ancient times, is fascinating; but what if such a beast still existed today?

Almost certainly, this seems unlikely, although there is nothing that would make this physically impossible, per say. After all, the Water King only stood a foot taller than the tallest penguins presently in existence, the Emperor Penguins, which have been known to reach heights in excess of 50 inches (a little more than four feet tall). Looking even further back, earlier in the lineage of giant prehistoric penguins there was another species, Anthropornis nordenskjoldi, which actually stood close to six feet tall!

The notion of anomalous giant penguins of similar size existing today does however bring to mind one peculiar episode involving the famous naturalist Ivan T. Sanderson, who authored what is perhaps the definitive volume on Bigfoot and Sasquatchery around the world, Abominable Snowmen: Legend Come to Life. Between 1946 and 1948, large, mysterious three-toed footprints began appearing up and down the beaches around Clearwater, Florida. People claiming to have been on the beaches the evening before a series of these footprints would appear sometimes even claimed that they had seen a “monster” stumbling about. Sanderson, an expert in exotic animals of both the known and unknown kind, visited the area and investigated, proposing that the tracks resembled those of a giant penguin. More reports of “sightings” followed, and thus the monster’s appearance followed suit, appearing taller–close fifteen feet–and more birdlike than before, now waddling it’s wide gate, as opposed to leaping or crawling as surmised earlier.

Though at the time there had been at least some credible notion that a giant bird might have been visiting Clearwater, years later the entire affair was revealed to be a hoax. Jeff Klinkenberg, writing for the Saint Petersburg Times, uncovered the testimony of a man named Tony Signorini, who along with his partner, Al, created heavy lead castings of what resembled “dinosaur footprints,” which they bolted to black high-top gym shoes. With their props now prepared, the mischief soon began:

Al and I rowed out to the beach. I put on the shoes. I jumped out of the boat in shallow water. I was young then, about 25 or so, and much stronger than I am now, an old man. I had to kind of swing my legs out to the side and then forward to get going. Somehow I didn’t break my legs. I left deep tracks about 6 feet apart. I made this big loop from the surf, up the beach, and then back into the water to the boat.

Somewhat incredibly, Signorini claimed he was “sure the police chief knew it was us, but he never said anything.” Additionally, his wife had been in on the gag, and “thought it was funny. And she knew there were worse things a man could be doing than making monster tracks.