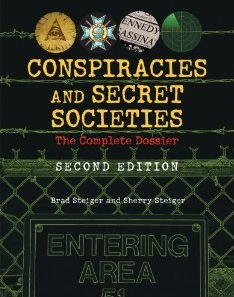 A number of years ago, my friend Joshua Warren and I were working together doing his Speaking of Strange radio program, and I recall the first time we ever had the prolific author, Brad Steiger, on as a guest. The depth of Steiger’s knowledge on a variety of subjects was staggering (or maybe I should “Steigering”), and following the interview, I contacted Brad and asked if he would grant me, a budding young Fortean researcher, an interview for a book proposal I had been working on. Steiger accepted with good cheer, and the interview we did remains one of my all time favorites; Steiger also remains chief among those I’m proud to call an influence, mentor, and most of all, a friend.

At the time we first became acquainted, Brad had been promoting his new book Conspiracies and Secret Societies: The Complete Dossier, and though I remember being fascinated with the subject matter, I somehow never ended up obtaining a copy of the book itself. Thus, you can imagine my excitement when, more recently, I received a copy of the newly-updated second-edition in the mail from Brad’s publishers.

In the second edition of Conspiracies… Brad and his lovely wife and fellow researcher, Sherry Steiger, delve into an entire host of conspiracy theories and shady dealings carried out by officialdom. The introduction to the new edition begins with the signing of the controversial National Defense Authorization Act by President Barack Obama, dealing with the potential for imprisonment of U.S. citizens in the absence of charges against them or trial, thus setting the tone for a compendium that is bleak, at various points throughout, but timely… if not necessary with its scope. Subjects in the new edition range from AIDS and mystery airships to the Face on Mars and Zionist Occupation Government, with focus on all the best known (and least admired) secret societies, including the Bilderbergs, Knights Templar, and several others.

As foreshadowed perhaps with the book’s introduction, a sure to be controversial inclusion with the latest edition is an entire section on conspiracies directly associated with Barack Obama, ranging from the well-known “birther debate” to allegations that Obama himself may be an alien hybrid, “created from the DNA of a human mother and the sperm of an extraterrestrial visitor.” The beauty, of course, of Brad’s writing has always been that, while the author himself may be careful not to endorse any particular viewpoint (whether it relates to strange phenomenon, or as this case shows, a political one), he is always honest with his presentation of the material he features, and sets forth with an unbiased realism, offering only the details as he has found them, and encouraging the reader to educate themselves based on these before coming to conclusions on their own.

Familiar to readers of the original edition of the book are such subjects as the Oklahoma City Bombing, Alaska’s HAARP project, Jack the Ripper, and even Steiger’s own partner in crime, radio host Jeff Rense, who has managed to drum up varying degrees of conspiratorial controversy himself over the years. Indeed, the new collection is well worth adding to any library that caters to the fringe… but as often is the case with Brad Steiger’s writing, newcomers should be forewarned: reading this author’s work may just change your outlook on life, and for that matter, the entire world you thought you knew… radical shifts in your accepted reality may await!