Mystery Booms Still Being Reported Daily Around the World 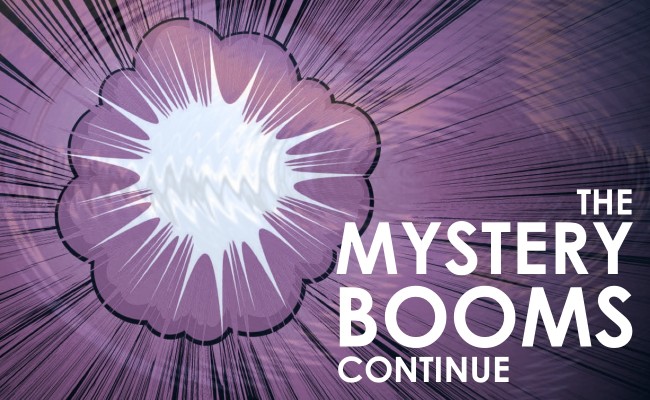 For months now, loud crashes and booming sounds have been reported in various parts of the world. Some are described as sounding similar to fireworks, while others are likened to transformers exploding. Their origin in many cases is no doubt prosaic, while in other cases the strange crashes, which purportedly are capable of causing mild tremors and window shaking, seem less easily explained.

(Update: With many news outlets reporting over the winter months that frost quakes, also called cryoseisms, may be behind some of the mystery noises, for a complete resource on this phenomenon, visit this page. For information on other possible causes of mystery booms heard around the world, visit this link).

Here at The Gralien Report and at Mysterious Universe, I’ve been featuring articles documenting some of the “mystery booms” that are being described in various parts of the world, particularly around the the United States, as well as scattered reports around the United Kingdom (Below this update, I’ll have links to the primary report we featured here on the site regarding the “mystery crashes” as a global phenomenon, as well as similar articles I contributed to Mysterious Universe as referenced above).

Over the Christmas and New Year holiday, some of the most recent reports of mystery crashes have emanated from Indiana; just this morning, three reports were submitted to The Gralien Report which document strange explosive sounds, as well as rumbling and shaking felt on ground level. Those reports are as follows:

“Someone posted your November 25, 2014 article, “Mysterious Booms Are Being Reported Across America Again”, in which you request similar reports be forwarded via email or through comments, on Facebook tonight in response to numerous reports of loud unexplained “booms” and sounds of explosions being heard throughout northern Indiana from early afternoon (northernmost areas e.g. South Bend) throughout the afternoon/evening hours (Warsaw, Plymouth, Chain of Lakes area, etc). Residents report homes shaking/windows rattling. Many calls to area news media. No police reports thus far. Social media is buzzing. Just thought you might like to know if no one else has mentioned it to you yet.” -Trisha

“I live in Virginia and was visiting family in souther Indiana over the holidays when my mother and I heard a loud boom (explosion). It was December 26th, 2014. I think the time was around 4pm local time. It was loud enough it shock the house slightly and my mother and I both looked at each other after it happened ‘like what the heck was that’. We were at my mothers house in a small town named, Chrisney, Indiana. My aunt who lives approx. 12 miles away was meeting us at 5 to drive to Evansville also said she heard the same thing. I have since searched the internet to see if anyone else reported hearing this and have not found anything except reports of similar noises being heard in Evansville area earlier in 2014. Please let me know if you are aware of any other reports. I am very curious as to what that could have been. Very strange.” -Brian

“I live in Warsaw, Indiana. Last night there were loud booms, and reports saying it a was plane breaking the sound barrier. Many reports were made.” -Amy

Earlier this year, there had been similar reports in New Jersey that connected the explosions with sonic booms from aircraft, as discussed

A more recent theory as to the cause of the mystery booms was offered to the Sentinel and Enterprise by geologist Sharon Hill, owner and operator of the Doubtful News website, who suggested “frost quakes” as one possible explanation:

“Hill said one possible explanation of the sounds in Fitchburg is a frost quake. This phenomenon occurs when water in the ground is exposed to sudden cold conditions, which can freeze it underground. In some cases, Hill said, there are surface fractures as well. A frost quake would explain the earthquake-like house-shaking that some residents have reported.

Hill said these earthquake-like conditions may not be recorded by seismic charts.

However, the area did not appear to have a sudden cold snap on Dec. 20, the night of the initial loud booms. Meteorologists from the National Weather Service in Taunton confirmed the air temperatures were above freezing and didn’t change much at the Fitchburg Municipal Airport on Dec. 20. While ground temperatures tend to be colder than air temperatures, a wet, cold period didn’t start until Dec. 22. That doesn’t rule out a geological explanation, but it’s not a slam-dunk.”

Other proposed theories in the past several weeks have included Russian high-altitude weapons tests, a secret U.S. spy plane, fireworks, and military explosives tests. For more information on the reports, as well as theories to their cause, please see the links below:

“The Mystery Crashes: A Global Phenomenon” –The Gralien Report

“Mysterious Booms Are Being Reported Across America Again” –Mysterious Universe