Washington DC area UFO columnist Roger Marsh recently posted this video from the Mutual UFO Network (MUFON) on his website, regarding fascinating footage of an alleged triangle UFO recorded over Florida just before midnight on July 17th of this year:

The witness described seeing “a triangular object” that moved left to right, as well as up and down. His neighbor had alerted him to the presence of the strange craft, and after seeing it, he went and awoke his sleeping wife, who he calls “the biggest UFO skeptic that I know”. The the object was recorded with the video function on a Casio Exilim 10.1 mega pixel camera, and relative to the circumstances, it is interesting to note that the witnesses observed two airplanes the same evening, which behaved differently from the object in the video above. Of course, this looks very similar to something Gralien Report readers may have already seen. Read on, dear seekers of strangeness…

Last year, in a post titled UFO News: Best New UFO Photos, I included a photograph allegedly taken by a peace officer near Stephenville, Texas in February of last year which depicted a strange, triangle-shaped object with two large orange plasmas floating around it (to see the entire photo, click the link above). Below is the cropped version, slightly enlarged, that shows the object by itself. Since the image was a scan of a photo that was either printed or was taken with a film camera, the quality is a bit grainy, although the triangle shape is quite evident. 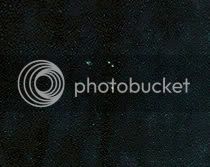 What are these bizarre looking triangle-shaped UFOs? Are they some secret government project, similar to the Stealth Bombers of yesteryear (which so often have been used to explain away sightings of triangular UFOs), or are they something otherworldly?