The Pentacle Memorandum: What a 1953 Secret Memo Tells Us About Government UFO Studies

It was the summer of 1967, and Jacques Vallee was feeling troubled.

A young French computer scientist living in America, Vallee had been tasked with one of the most unusual jobs anyone could imagine: he was assisting astronomer J. Allen Hynek with the review of reports collected by the United States Air Force about unidentified flying objects.

Throughout the 1960s Hynek’s star had been steadily rising, and the astronomer had quickly become one of the most recognizable authorities on the UFO subject. While attempting to maintain an impartial attitude toward UFOs and what they might represent to science, it was becoming clear that Hynek enjoyed the degree of notoriety he was gaining from lecturing around the country.

The more that Hynek’s enjoyment seemed to increase, however, the more troubled his French associate back in Illinois became by his colleagues’ newfound celebrity. To Vallee, the most important work to be done could not occur in the limelight; if any serious resolution to the UFO problem were ever to come about, it would require a disciplined scientific effort from behind the scenes.

It would also require careful organization, something that Hynek’s files had been sorely lacking as he was increasingly away from home. Shouldering the burden on his own, Vallee had visited Hynek’s office one evening in June, 1967, and spent several trips loading boxes of unorganized files into his Buick. From there, he carried them to their computation center, where Vallee would attempt to bring some order to their present state of chaos.

“The worst section of the files,” Vallee wrote in his journal, “concerned the history of the Air Force projects themselves, from Sign and Grudge to Blue Book.” Following the institution of Project Bluebook, which was the longest lasting of all the USAF projects looking at UFOs, there were also a number of studies and review panels undertaken to try to assess what the UFO problem might represent.

PODCASTS: THE Pentacle Memorandum: Anatomy of a Coverup

Beginning in 1952, following a recommendation to the Intelligence Advisory Committee following the Central Intelligence Agency’s own review of Project Blue Book, a panel convened in January of 1953 headed by Howard P. Robertson, that concluded UFOs did not present a direct threat to national security. However, the Robertson Panel did express concerns that widespread public interest in UFOs might still result in security threats: namely the clogging of military communications channels. It was therefore advised that an “education campaign” be employed to aid in redirecting public attention away from the UFO subject. The following year, the Battelle Memorial Institute also completed a study based on a statistical analysis of nearly 3,200 Blue Book reports that had been collected by that time. The result was Project Blue Book Special Report №14, which the Air Force released publicly in 1955.

“Allen had misplaced many of the documents,” Vallee noted as he sifted through the boxes of files. “And it is in that section that I found a letter that is especially remarkable because of the new light it throws on the key period of the Robertson Panel and of the classic Report#14.” 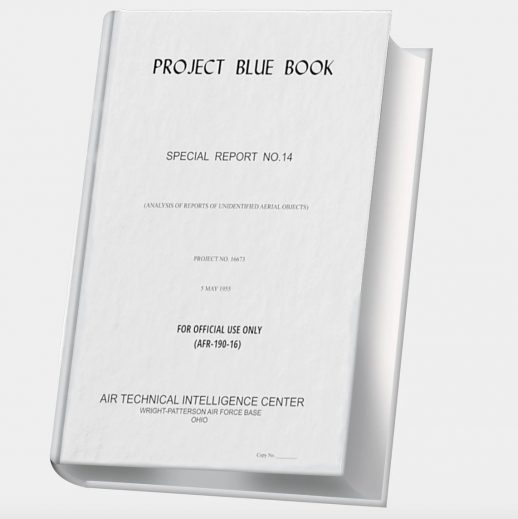 “It is stamped in red ink ‘SECRET – Security Information.’ It is dated 9 January 1953. IT is signed by a man I will call Pentacle.”

The document in question disturbed Vallee. What this secret memorandum appeared to detail was “the fact that prior to the top-level 1953 Robertson Panel meeting somebody had not only listed but analyzed thousands of UFO cases on behalf of the United States Government.”

Who was looking at UFO reports—thousands of them—outside of the USAF? Furthermore, why had this group seemed to suggest postponement of the Robertson Panel in 1953? Perhaps more pertinent to Vallee at the time had been the fact that “Pentacle” made explicit references to “what can and what cannot be discussed” at the panel. Had this independent review by “Pentacle” and his organization even had some degree of control over what the Robertson Panel would have access to?

Public knowledge of the document, which Vallee dubbed the “Pentacle Memorandum,” would not come to light until decades afterward, once Vallee published his journals in a four-volume series titled Forbidden Science. Shortly thereafter, a “leaked” copy of what appeared to be the same memorandum was obtained by UFO researchers, and later confirmed by Vallee to be the same document he had observed in 1967.

However, rather than being a “bombshell” at the time of its rediscovery, it only managed to generate more controversy. Some researchers who reviewed the document, including UFO historian Barry Greenwood, felt that it was not likely to be of the great significance Vallee had initially suspected. In fact, the memorandum’s author, H. C. Cross (whom Vallee had nicknamed “Pentacle”) was later identified as having been with the Battelle Memorial Institute; what this showed was that the thousands of Blue Book files referenced in the memo had been none other than those being studied by Battelle in advance of Project Blue Book Special Report #14.

Although some of the questions about the Pentacle Memorandum were cleared up following its release and further assessment by historical researchers, a few questions did remain. As Vallee would later express to Barry Greenwood in a letter, Hynek eventually confronted members of the Battelle study the same year he uncovered the memorandum, asking them about what it entailed. To this, they “reacted with fury when Hynek went back to Battelle in 1967, demanding to know the truth. The man I have called Pentacle snatched his notes away and told him in no uncertain terms that the contents of the memo were not to be discussed, under any circumstances.” Why might this have been the case, if the contents of the memorandum had been entirely mundane representations of well-known historical events?

“Perhaps the Pentacle memo only proves that scientific studies of UFOs (and even their classified components) have been manipulated since the fifties,” Vallee conceded. “But it also suggests several avenues of research which are vital to the future of this field: why were Pentacle’s proposals kept from the panel? Were his plans for a secret simulation of UFO waves implemented? If so, when, where and how?  What was discovered as a result? Are these simulations still going on?”

In terms of Vallee’s reference to a “secret simulation of UFO waves,” this refers to a specific portion of the document in question, which read as follows:

“Assuming that, from our analysis, several definite areas productive of reports can be selected, we recommend that one or two of theses areas be set up as experimental areas.  This area, or areas, should have observation posts with complete visual skywatch, with radar and photographic coverage, plus all other instruments necessary or helpful in obtaining positive and reliable data on everything in the air over the area.  A very complete record of the weather should also be kept during the time of the experiment.  Coverage should be so complete that any object in the air could be tracked, and information as to its altitude, velocity, size, shape, color, time of day, etc. could be recorded.  All balloon releases or known balloon paths, aircraft flights, and flights of rockets in the test area should be known to those in charge of the experiment.”

“Many different types of aerial activity should be secretly and purposefully scheduled within the area,” the portion of the document concludes. What had this been intended to mean? Obviously, Vallee interpreted this to convey that “a secret simulation of UFO waves” might be undertaken. However, another interpretation of this portion of the text might be that Cross (i.e. Pentacle) was merely suggesting that known military aircraft could be flown in these proposed “experimental areas,” knowledge of which would be useful to military officials if civilian reports concerning alleged UFOs were forthcoming after what could be conclusively identified as military aircraft activity. Rather than a “secret simulation of UFO waves”, perhaps the aim had been more geared toward assessing whether the public mistook some military flights for being UFOs.

Arguably, what may be the biggest takeaway from studying the Pentacle Memorandum is that much of the official response from the government to issues related to UFOs is subject to interpretation by researchers after the fact. Each is likely to have their own views about the meaning behind such information, and what its implications may be… which is hardly any different from the broader study of UFOs that have taken place over the last several decades.

For many researchers, the so-called “Pentacle Memorandum” therefore remains an odd footnote–and at times, a divisive one–in the history of government involvement with the UFO subject.

This article originally appeared in the TSL Telepath Newsletter.