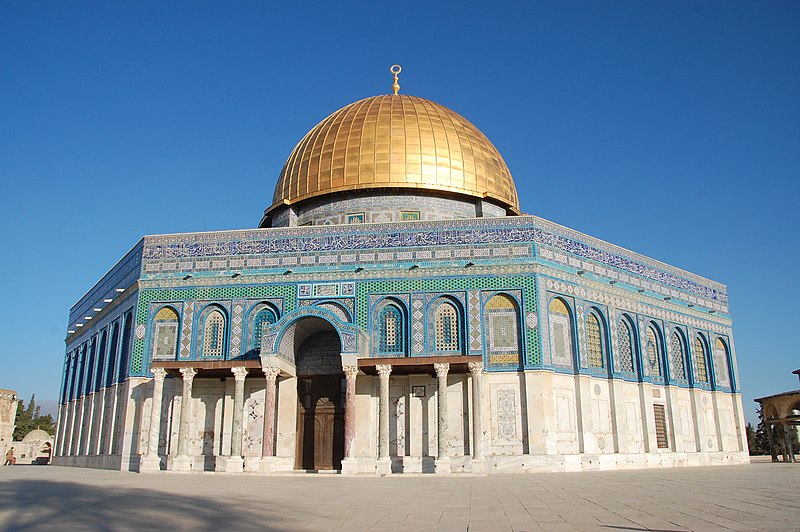 A startling new pair of videos depicting UFO footage from Jerusalem appeared on the web late last week, causing a subsequent stir on various blogs over the weekend (which included a segment during the third hour of my radio program last night). The videos, while showing activity so remarkable that they almost certainly suggest some sort of computer manipulation, may present something far more unique, due to the way they corroborate with one another so perfectly.

The primary video, which appeared on YouTube Friday and was subsequently linked to various blogs, depicts a strange object changing altitude at tremendous speeds over the Dome of the Rock on the Temple Mount, located in the Old City of Jerusalem. Additionally, a man is present in the foreground filming the craft with his cell phone; the alleged footage taken with the phone appeared on YouTube the following day.

Below are both videos, linked in order of their appearance:

UPDATE: A third and fourth video have now also appeared online, this time from yet another angle purporting to show the strange object over Jerusalem (scroll to the bottom of this post to see the video).

Obviously, if what this footage purports to show is authentic, we are looking at something truly astonishing. If one synchronizes the two perspectives, the audio matches entirely… though the sources used aren’t the same. In other words, the voices that are softer in the first clip are noticeably louder in the second and vice versa. This is because of the speaker’s proximity to the recording device in question relative to each piece of footage, and seems to prove that audio, at very least, was being recorded simultaneously from both the primary camera and from someplace on “camera two” (the cell phone). Could this lend credence to the idea that the primary footage and the cell phone video were indeed both filming the strange objects that appear in each clip?

Granted, looking at the first film makes it pretty obvious a man with a cell phone was standing there filming the event as well; however, it is important to note even the more mundane consistencies, if the two pieces of film are to truly corroborate with one another, and thus help viewers discern elements of fakery (or the lack thereof).

Next, synchronization of the two video clips also shows that the object behaves the same in each piece of footage, and at precisely the same time, from slightly different angles. Though this doesn’t rule out a CGI job well done, it does at least strengthen the possibility that what we’re seeing is real, since such multi-source corroboration is seldom presented, at best. However, this event would likely have to have been witnessed by several others in the area, even at 1:00 AM (as stated by the individual who uploaded the primary video). Indeed, witness corroboration of this event from outside the two known cameramen could make this circumstance truly extraordinary.

Though a fairly extensive analysis was posted yesterday on Youtube (see the comments of user “HOAXKiller1” below the clip available here), this evaluation of the film, I suspect, may have been issued prior to the release of the second corroborating film from the cell phone user. Additionally, some of the comments “Hoax killer” makes aren’t completely justifiable by logic. Consider this statement: “light should not have reached the back right side of the man’s jacket, that is impossible if the light is coming from the front.” It is possible, however, if there were a reflective solid surface behind the individual in question. Though we can only guess what structures were behind those filming the event (at least until their identities are potentially made known), a waist-high stone wall is already visible in front of the cell phone user. If this represents a balcony (again, something that can’t be confirmed at present), it stands to reason that a wall of similar color may have existed behind the individual on camera in the original film. The balcony is made of light colored stones, as we can see, and hence a wall of similar construct may have reflected light quite easily, if the source were bright enough (Update: the location listed for the first two videos in this series has emerged as the Armon Hanatziv panoramic lookout, near the vicinity of Mount Zion).

Additionally, the photos from the aforementioned analysis don’t show conclusive evidence of “photo manipulation”, but merely digital artifacts that could be interpreted as such (although, granted, we can’t rule out the possibility that they indicate tampering of some sort). It stands to reason, however, that many of the “artifacts” pointed out could just as easily have been present in virtually any kind of digital footage, manipulated or not, for the more obvious reason of being recorded in a digital format to begin with.

In theory, the appearance of the second piece of footage from the cell phone user should make gathering data more helpful for investigators. Hopefully, a few individuals with better ability to discern data using software and technology than I could offer will take time to try and do so, rather than dismissing this case outright. Indeed, considering a traditional “skeptic’s” argument, we might note that people are indeed quick to say things like “if UFOs were real, you’d think somebody would have filmed a decent video by now, especially with all the cell phone cameras people carry around today.” And yet, even if the footage above represents just the sort of thing an unapologetic skeptic might have been describing, even those staring at the smoking gun will inevitably say, “well, if it’s uploaded to YouTube, it can’t be trusted,” or some similar “argument” seeking only to justify one’s preconceptions. As was the case with “Hoax Killer,” many will likely go into this with one very obvious preconception: that the object represented in the videos is a fake… and hence, it will inevitably become whatever the eye of the beholder wishes for it to be (and therefore dismissed as such).

That said, I’m certainly no stranger to skepticism myself, and wouldn’t bet my career in ufology on the veracity of these video clips. However, similar footage from other parts have begun to emerge as well. Consider the footage below, shared with me by Nancy Planeta, host of The Vixen’s Vault Radio Program:

Indeed, if similar footage begins to emerge from elsewhere around the globe, then perhaps investigators won’t be so quick to dismiss the Jerusalem “anomaly.” What are your thoughts on this footage? Also, does anyone have access to information about UFO groups in the area that could gain access to witnesses, or perhaps the cameramen themselves? Please feel free to use the comments field below, or to email me if you prefer.

UPDATE, 12:42 AM, 2-2-11: Now a third and fourth video have in fact appeared on YouTube, purporting to also show the mysterious object over the Dome of the Rock in Jerusalem from a completely different angle (special thanks to GR correspondent Christopher McCollum and Nancy Planeta for bringing “number three” to my attention):

Finally, here are videos 1, 2 and 4 synchronized in one frame for comparison:

Real or fake? I must admit, number four there almost looks too good to be true… does that mean it is? 😉

Dome of the Rock image by David Baum.