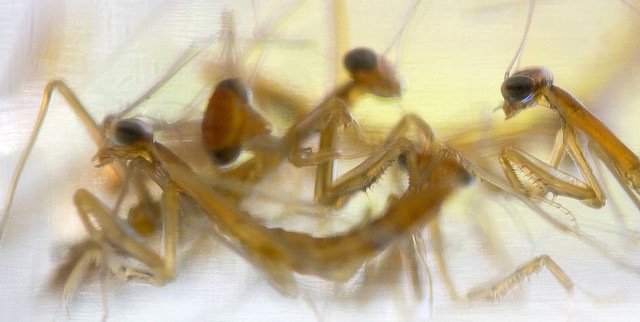 A Pennsylvania man now says he can mark seeing an alien off his bucket list, as reported at the MUFON UFO Stalker live event feed. The strange story involves not one, but three weird entities: an amorphous glowing ball of plasma, a H.G. Wells-esque “tripod” creature, and a fractal mantoid the likes of something from one of Terence McKenna’s DMT trips (those familiar with psychedelic literature and, more specifically, modern pharmacology, may know that there is a greater potential link between all three of these creatures… but I get ahead of myself, as usual).

The report reads as follows:

On 8-15-2009 at 2:45am I was buzzed for about 5 seconds by a 4 foot round luminescent orb on the roof of the building that I work in, in Philadelphia . It materialized about a foot away from me, blocking my way and making a buzzing sound, it then took off and dematerialized in approximately a 6 feet distance. At this time I decided to turn around and leave the roof. I found a photo of the object here.

“About an hour later at 3:45am I was walking through a machine room on the roof, near the same location of the orb, when I encountered a 3 foot tall triped creature. It was standing by an electrical transformer looking up at the conduits. I observed it for about 30 seconds from a distance of four feet before it turned around and noticed me. I was looking down at it! It had a beautiful baby blue eye which was moving rapidly, just one, a long eye lid and rubbery looking legs with bulbous feet.

“I could see it was starting to panic because it started stomping his feet like a mad skunk or jumping up and down and making a high pitch squeaking sound almost like a cats toy. I was blocking it’s way to the open roll up door leading to the roof behind me. I put up an open hand in a gesture to let it know that I wouldn’t hurt it and backed up towards a different part of the machine room, away from it’s path to the door, but kept my eye on the creature. I watched it walking down the isle slowly when it started to move. It stopped where I had turned to get out of its way, it then turned and looked me over for a couple of seconds. I couldn’t help myself and started to laugh at it. I felt like a child who saw a monkey for the first time or something! I got the impression that it was thanking me but I think I also offended it because it started to leer at me and it’s eye changed to a lighter color. I could be wrong, it may have took a bow! The triped then took off running in the direction of the door disappearing behind machinery in the area. I didn’t feel threatened in any way by this creature but I was quite sure that cornering it was a bad idea! In hindsight of this encounter I’m left with a feeling a of wonder. The buildings electrical generator was permanently shut down about a year ago.

“On this same morning I’m doing my paper work in the control booth, and a larger than man sized Praying Mantis comes up to the window and just stairs at me for about a minute. I did not feel comfortable with this encounter considering the nature of this kind of insect. I sat there and didn’t move a muscle until it left. I have also heard screeching sounds in the roof machine room, in the direction of the roll up door which made my hair stand up on the back of my neck around the same time for 2 nights.”

Indeed, “fractal mantises” are common, strangely, in both UFO abductee accounts, as well as descriptions of “alien” beings encountered by users of the powerful drug dimethyltryptamine (DMT). My friend Emperor over at the Cabinet of Wonders site gives us a little background on this: “While there have been reports of mantis-like entities before, like the Mantis Man of London, the mention of the mantis rang a bell (with me), as encounters with praying mantis-like insects are common in DMT trips, as described by Clifford Pickover. Endogenous DMT has been suggested as a cause for a range of strange experiences and it may be the mantis is pointing this out to us.”

What Emps means when he describes “Endogenous DMT” has to do with the strange fact that the stuff, while known to man as one of the strongest hallucinogens on the planet, is actually produced in our bodies, most likely in the pineal gland. This theory, proposed by pioneering psychedelics researcher Dr. Rick Strassman M.D., might explain a variety of strange things that correlate with the appearance of mantises, as well as spindly “stick figures” like the Pennsylvania witnesses’ “tripod”.

For instance, the research of Dr. Michael Persinger resulted in the theory that electrical stimulus to the human brain can (and often does) cause hallucinations that present the sensation of a “presence”. Many forms of this research can be found when studying several scientific fields. If one looks into getting a bachelor degree online you can find areas of interest that may explore studies similar to Dr. Persinger’s. Conducted in sound proof rooms where test subjects wore helmets that induced strong electric fields, many nonetheless described hearing noises and sensing a presence in the room with them. Persinger found that his subjects also experienced noticeable drops in production of Melatonin, a tryptamine produced in the brain that regulates sleep and sex drive. This research got me thinking along the lines that electrical phenomenon might indeed be the key to triggering that “endogenous” pineal release of DMT (which I must also add, to my knowledge, was first proposed by Strassman also in his book DMT: The Spirit Molecule). This would explain bizarre instances where people suffering from conditions like Electrical Hypersensitivity and Multiple Allergy (EHMA) seem to have trippy encounters with “aliens” while working near strong electric fields: they literally may be “tripping” on small amounts of DMT released into the bloodstream as a result of drastic changes in electric fields in their environment. But how exactly could an EM field cause such a thing to occur? To truly how to understand and disseminate complicated information many have worked towards a masters in communications. Education is helpful when trying to compile data and provide scientific information to a skeptical audience, especially when the subject matter is not widely accepted.

Strassman pointed out to me several months ago that (in theory) we might assume that since EM fields cause a temporary shutdown of Melatonin production, “latent metabolic pathways” might in turn be opened, allowing a substance like DMT an un-hindered path into cerebro-spinal fluids. It’s also worth discussing here that Melatonin and DMT are chemically very similar. If we already know Melatonin is produced in the brain, it stands to reason that DMT is also, and such theories (though merely theories, at present) are correct.

That being said, let’s take a closer look at one or two of the points the Pennsylvanian makes in his report:

“About an hour later at 3:45am I was walking through a machine room on the roof, near the same location of the orb, when I encountered a 3 foot tall triped creature. It was standing by an electrical transformer looking up at the conduits. I observed it for about 30 seconds from a distance of four feet before it turned around and noticed me.”

It could be assumed by his distance from the tripod creature (four feet) that he was also close to the electrical field being emitted by the transformer, which the creature was standing next to. Again, electric fields may play into the appearance of the Mantis, having occurred the same morning:

“On this same morning I’m doing my paper work in the control booth, and a larger than man sized Praying Mantis comes up to the window and just stairs at me for about a minute. I did not feel comfortable with this encounter considering the nature of this kind of insect. I sat there and didn’t move a muscle until it left.”

If indeed the witness were to suffer from the effects of EHMA or a similar condition, and as illustrated in the theories outlined above, this might allow EM fields to trigger an endogenous release of DMT, it’s no surprise our contactee witnessed something so similar to entities reported by DMT users. It is also noteworthy that “spindly stick-people” were also common during Strassman’s DEA-approved clinical studies with patients to whom he administered large doses of DMT in the early 1990s. Might the “tripod” seen earlier the same day qualify as a “spindly stick-person?” One final point:

“I have also heard screeching sounds in the roof machine room, in the direction of the roll up door which made my hair stand up on the back of my neck around the same time for 2 nights.”

Strange noises were commonly reported in Persinger’s studies also. Joshua Warren and I have discussed on a few occasions the notion that roll-up doors and other spinning objects made of plastic or similar materials might be capable of producing strong static charges, capable of emitting a powerful static electric field that might cause nausea, disorientation, or presumably, the same sorts of effects described in the Strassman and Persinger studies. Along these lines, Emperor also notes that “The mention of the buzzing sphere in proximity to electrical equipment, reminds me of the numerous cases we have looked at involving electrical UFOs or plasma spheres. The appearance of the triped could be the result of the sphere’s impact on the brain.” For more of his fine commentary on this subject, visit his original post by clicking here.

I’ll end this with a couple of quotes from two of my favorite researchers in this field of study; in his book Sex, Drugs, Einstein, and Elves, Clifford Pickover ponders the same: