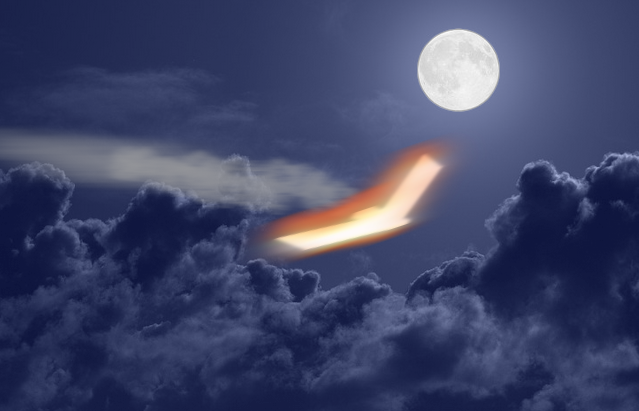 A commercial pilot and 30-year veteran of the Australian skies says he managed to capture photographic proof on Good Friday of something unlike anything he had ever experienced while flying.

The encounter, reported by the Sunshine Coast Daily and other Australian news outlets, tells the story of a pilot who had been watching the night sky with friends at approximately 8 PM local time on Good Friday near Caloundra. After observing colored lights in the sky, an orange illuminated object that bore the characteristics of something built for flight piqued the interest of the pilot photographer, who requested anonymity.

“We were looking for an identifier; a beacon or strobe light but there wasn’t any,” he told reporters.

Click here to see images of the pilot’s “UFO”

After snapping a series of photographs, what had appeared at the time to be simply a fast-moving colored light in the sky appeared to take the shape of an aircraft when enlarged.

“I have heard of and seen many, many things in my career and have flown all over the world, but nothing like this… it has changed my mind that there could be something else out there,” reported the SCD.

Military aircraft could be one solution to the identity of the mystery craft, although the illumination the object appears to have in the photos is not consistent with any known military plane, drone, or other flying vehicle.

However, the object does bear a close resemblance to a remote controlled hobby-plane, which are often fitted with colorful neon lighting, as in the video below:

Mysterious planes have recently been in the news elsewhere, with photographs of a new kind of aircraft, believed by some to be a new variety of stealth plane, appearing over Kansas and Texas in recent weeks. The identity of these aircraft remains inconclusive, while aviation experts remain intrigued by the craft and their maneuverability.

One Reply to “Mystery Aircraft Encountered by Pilot Over Australian Coast”