Looking Behind the Mask: Cosmic Trickster Phenomenon and the ETH 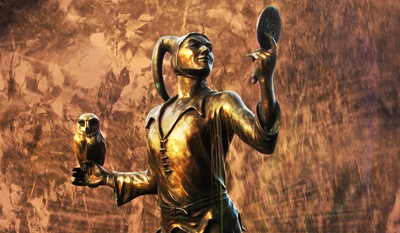 The study of UFOs, for the most part, is concomitant with the alleged presence of intelligent alien life visiting planet Earth. Ever since the late 1940s, when strange and highly-advanced aircraft began to appear that was unrecognizable to a majority of our military institutions in countries around the world, members of the scientific community and intelligence agencies that were bold enough to embrace the serious study of such as-yet unexplained phenomena were forced, partially for lack of any justifiable proof to the contrary, to consider whether some of the UFOs being witnessed might actually represent alien intelligence from other worlds.

Probability, on the other hand, would likely favor a terrestrial origin for the majority of our unexplained aerial phenomenon that remains unaccounted for in any official capacity. After all, while the possibility of alien life does exist, the lack of any physical evidence for this forces those of us bound to the often harsh scrutiny of scientific methodology to accept that in the lack of any such evidence, this may not be the likeliest solution to the UFO problem.

But removing the more obvious notion that many UFOs could be man-made aircraft buzzing around unbeknownst to the majority of us, there still may be other ideas worthy of consideration that, while speculative, could lead to some new understanding of the apparent separation that UFO phenomenon appears content to keep in relation to humankind and our level of awareness regarding UFOs. Thinking along these lines, my friend David Jones, editor of New Dawn Magazine in Australia, recently shared an article with me that explores some of these odd elements of Ufology, and how there almost seems to be an element of “disguise,” or even a subtle sense of “practical joking” on part of the intelligence behind some alleged forms of ongoing nonhuman contact (here, we mean specifically the variety that could be associated with UFOs and what we perceive as “aliens”). The piece, titled “Behind the Mask: Aliens or Cosmic Jokers?” was penned by researchers Lynn Picknett & Clive Prince, and is now available for viewing on New Dawn magazine’s website:

Behind the Mask: Aliens or Cosmic Jokers?

In their article, the authors touch on the seemingly inextricable association between UFOs and extraterrestrial phenomenon thusly:

“The ETH has become so dominant partly because the Magonian approach challenges our cherished consensus reality so outrageously, whereas the concept of space ships from other planets doesn

9 Replies to “Looking Behind the Mask: Cosmic Trickster Phenomenon and the ETH”