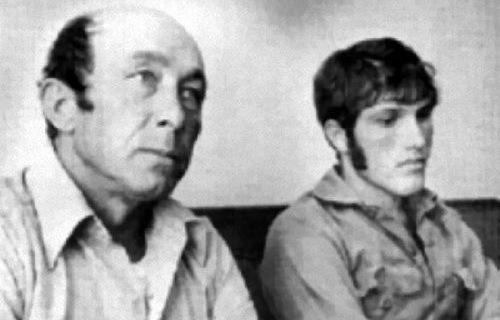 Charles Hickson (left), one of two alleged alien abductees famous for their 1973 encounter with a UFO and its foreign-looking occupants, was pronounced dead on Friday. He was 80 years old.

Hickson was 42 years old in 1973 when he and his 19 year-old-friend, Calvin Parker, said a large UFO craft approached them one evening while fishing at a pier by the Shaupeter Shipyard in Pascagoula, Mississippi. From the craft, three beings were said to have emerged, floating along just above the water towards Hickson and his frightened companion. According to their testimony, they were taken aboard the craft, but were not harmed by the “alien” beings.

“I certainly don’t think they’re hostile at all,” Hickson told interviewers, describing his captors after the abduction.

In the years following the close encounter, Hickson authored a book about his experience, titled UFO Contact at Pascagoula. The Mississippi Press reported yesterday that the author and abductee had passed away, linking a variety of audio and video related to his famous abduction. Below is a link to the article, featuring archival audio recordings of Hickson describing his otherworldly experience:

“Some kind of creatures or beings exist up there,” Hickson had said of his alleged captors.

It was October 11, 1973, that the lives of Charles Hickson and Calvin Parker changed forever. The two men had been fishing all night, “when all of a sudden, I heard some kind of zipping sound behind us.” The two men saw a thirty-foot-long, ten-foot-high illuminated object, shaped roughly like a football.

“The expression on Calvin’s face told me he was looking at the same thing,” Hickson recalled, as the two men watched a doorway open on the front of the craft. “There is no way for me to express the feelings I had when those three things appeared in that opening,” he said. The creatures, covered in shiny skin that reminded the men of an elephant’s hide, glided toward the two men approximately two feet off the ground. Parker fainted as the creatures reached them, and though Hickson remained awake, he said he was unable to resist being captured.

A variety of instruments and other equipment were in the room the two men were taken, though Hickson’s recollection of the exact nature of the equipment had been lacking. After being examined, the two men were released by the aliens, who returned him to the same rough location where he and Parker had been apprehended. According to witness reports from around the time of the abduction, others in the Pascagoula area had seen the UFO that allegedly took the men aboard their craft just prior to their kidnapping.

Hickson’s experience had been strange indeed, and after the initial encounter, like many other abductees he claimed to have remained in in contact with the alien abductors via psychic means. Telepathic communications of this variety occurred on at least three occasions, according to Hickson, but in addition to psychic phenomenon of this sort, his overall spirituality seemed to have deepened after the experience as well. “I believe in God,” he once said, “and why do we think that he would put life on this one little world, with all those other worlds up there?”

At the time of their encounter, Hickson and Parker had worked at the nearby Johnnie Walker Shipyard. Hickson was age 80 when he was pronounced dead on Friday, having passed away in the town of Ocean Springs.