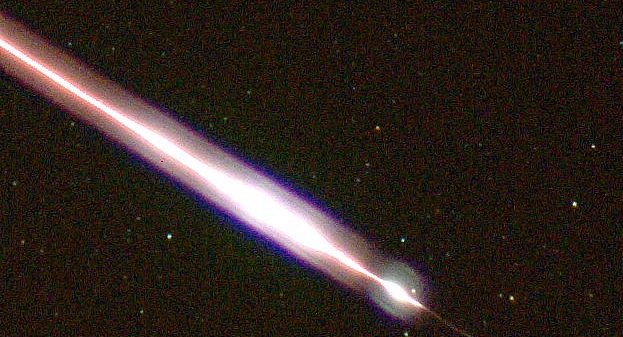 The night skies of Southern California, Arizona and neighboring states last night were the apparent host to a bright, multicolored, and as-yet unidentified object. The strange light, seen streaking along by individuals in a number of localities including Corona, Irvine, Lake Forest, Murrieta, Ontario, Perris, Riverside and San Clemente. Officials say the object was likely a meteor, though pieces of a falling satellite or space debris were offered as solutions also, and subsequently denied.

The Director of the nearby Griffith Observatory, Ed Krupp, when asked by Los Angeles CBS News affiliates, said the most likely explanation, “is that a piece of interplanetary debris, probably something about the size of a pebble, intercepted the Earth, passed through the atmosphere, and burned up.” Similarly, a National Weather spokesman said that the likely explanation was a meteor. The FAA has also confirmed the object was not any kind of aircraft.

Below is a link with videos from several locations depicting the object… but pay close attention to the last home-video footage in the series, filmed over the Glendora area. Here, the object(s) can be seen changing color and moving side-to-side in mid-descent… perhaps there’s more here than meets the eye:

Not surprisingly, there is a name for the behavior seen in this final video, appropriately dubbed falling leaf phenomenon. It’s used to describe the way that purported UFOs sometimes “descend by moving from side to side in the manner of a falling leaf.” Indeed, the object in the Glendora footage does seem to move in such a way (lending a bit of this perceived movement to the fact that the camera is shaking slightly as the object was filmed). In addition to the frequently-reported blue and green colors associated with meteors, a wide range of other colors, from red to yellow and orange, were also associated with the falling object seen last night, adding to its enigmatic character.

So what was the source of the strange light? Was it a meteor, burning and falling in an erratic way, which caused it to appear more anomalous than the typical falling star?