Cow Tipping: What Were These Strange Lights Seen Over Texas? 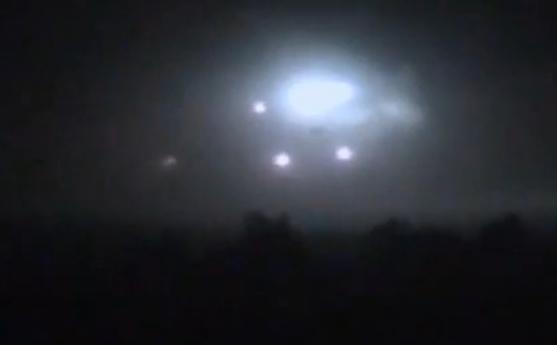 Residents of a farming community in Texas are apparently baffled over the appearance of strange lights over a field in recent days, and in close proximity to an area cattle ranch. The source of the lights remains undetermined, although video footage that shows the odd illuminations has been featured online and at various news sites including The Huffington Post.

The video, which can be viewed by clicking here, seems to show larger, bright illuminations that are central to the objects, with the inclusion of smaller colored lights that hover around and beneath what appears to be a larger craft. The footage also includes comparisons made between the nighttime footage, and stills of the same area during daylight hours, which some believe provides compelling evidence that the lights had indeed been hovering in the air, and had not been oriented around grounded farm equipment, etc. But if not farming equipment or other commonplace sources for illuminations of this sort, what could be producing the lights seen in the video?

The footage was posted online on Jun 20, 2012 at the popular YouTube website by user “ShadoXAV,” along with the following commentary:

These lights appeared over a field where a rancher keeps his cattle. The lights appear to slowly move above the tree line then move below the trees. The lights appeared in the middle of the night when allot of the ground was covered in a thick layer of fog. I originally posted this video for Angela a few days after she recorded it. I removed this video when one subscriber said this was farm equipment. After taking a day time picture of the tree line and matching a few frames of video to the day time picture. It looks like these lights were to high in the sky to be farm equipment. I have reposted the video. I don’t claim this video to be anything except strange lights at night, in fog, over a field where a rancher lets his cattle graze. Due to the fog, not all of the video is clear or in focus. The video segments shown here are some of the best footage recorded. Angela was outside while recording this video. When the lights started to move quickly behind the trees and moved in her direction, she ran into her home. When she tried to continue recording video through her kitchen window, the lights were gone. The video and sound has not been altered and is played back as it was recorded. The video was taken around mid-night, on May 15th 2012 in Texas. Farm equipment? Fire fly’s? Swamp gas? Make your own decision. I have made mine.

Could this footage represent lights emanating from such things as helicopters, tethered lights, or some other more mundane source of illumination? In terms of the objects appearing to be airborne, might the angle from which the film had been made affect the appearance of the illuminations and their apparent ability to “hover” in midair as we’re seeing? And in the event that none of these explanations suit the circumstances, what else might we glean from studying the footage linked above?

9 Replies to “Cow Tipping: What Were These Strange Lights Seen Over Texas?”