Holes in the Poles: Hollow Earth Madness, or Fata Morgana? 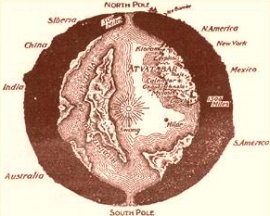 Along with various mention of excursions to the North Pole having taken place this year, one group has made some headway in organizing an expedition to find an opening at the Earth’s point where Earth’s axis meets the surface in the Northernmost hemisphere. The team, whose website is OurHollowEarth.com, shares this vision of discovery with us at their website:

This proposed expedition would like to conduct some scientific observations in the Arctic that is hoped will resolve once and for all whether the hollow earth theory has any validity. The indigenous Eskimos believe there is a hole in the Arctic Ocean. Observations of several Arctic explorers of mirages of land in the Arctic indicate that the most plausible location for a north polar opening that leads into the interior of the earth is located at 87.7 N Latitude, 142.2 E Longitude. To check out this theory, a group of hollow earth believers and scientists would like to charter a Russian Nuclear Icebreaker into the Arctic sea.

The notion that “mirages of land” can be visible stem from a variety of interesting sources. Apparently, Russians were some of the earliest to claim to have sighted what was dubbed “Sannikov Land”, north of the New Siberian Islands. Sannikov Land, in essence, is regarded by most historians as a pseudo-historic “phantom island” that may have existed in the Arctic Ocean. Yakov Sannikov and Matvei Gedenschtrom made the initial claim during their 1809-1810 cartographic expedition to the New Siberian Islands. Being first to report the sighting of a “new land” north of Kotelny Island in 1811, Sannikov’s name was also given to the supposed land mass.

Much later in 1886, a Baltic German explorer in Russian service named Eduard Toll also claimed to see the phantom land mass. Toll returned to the Arctic again in 1901 during The Russian Polar Expedition, but he and his team were soon blocked by floating pack ice surrounding the New Siberian Islands. A final 1902 attempt to reach Sannikov Land was excecuted, but this time the team’s vessel was trapped in ice. In November 1902, Toll and three companions left the ship in an attempt to depart Bennett Island towards the south on loose ice floes. None of the men were ever seen again.

Crocker Land is another name used to describe the same sort of phantom island. This name was given by Robert Peary to what he thought to be a mass of land he claimed to see in the distant northwest from the summit of Cape Thomas Hubbard, during a 1906 expedition. George Crocker of the Peary Arctic Club had been the inspiration for the naming of the island, which Peary estimated to be about 130 miles away at close to 83 degrees N, longitude 100 degrees W.

Some historians postulate that Sannikov land may actually have been an exposed land mass at one point which, during nearly 100 years that lapsed between expeditions intended to confirm its existence, was eventually submerged. However, perhaps one of the best explanations given for sightings of both Sannikov Land and Crocker Land may be that mirages that occur in Arctic regions called Fata Morgana. This is a mirage phenomenon named for Morgan le Fay, the fairy shapeshifting half-sister of the Once and Future King in popular Arthurian legends, and is caused by abrupt variances in air temperature when air above the line of sight is warmer than the air below (temperature inversion). Fata Morgana occurs only when light travels through multiple distinct temperature gradients., causing an image which may be compressed in some sections, and all the while appearing strangely expanded in others. To add to the anomalous behavior, air temperature changes over time continue to affect the varying angles of refraction, which cause the image to expand or contract as the atmosphere returns to its standard temperature gradient. Thus, a variety of strange optical effects can occur that cause land-like masses to become visible, when in reality, none ever existed.

Hollow Earth proponents believe that land masses seen in Arctic regions like this are indeed mirages, so in scientific terms, you could say they have at least half the equation correct. However, rather than mirages that appear to be land masses, the Hollow Earth theory suggests that the mirages are actually reflections of land existing within the Earth, visible through the large hole alleged to exist at the North Pole.

As strange as this all may sound, there were actually beliefs regarding the hollow Earth that came close to garnering military interest as far back as the early 1800s. Take for instance Capt. John Cleves Symmes, a hero of the War of 1812, who took up the notion that concentric spheres made up the inner Earth, creating a sort of layered inner-planet that might be inhabitable… or even already inhabited. Symmes’ theories were throw-backs to 19th-century scientific principles, many of which called into question whether the inner structure of the Earth could resemble an egg or other layered structure. Symmes began to look at other objects in nature, including bones, reeds, and even hair, which were known to be outer structures reinforced by a hollow center. If the interior of the earth were the same, he began to suppose that perhaps they could be reached through large holes. These would be a few thousand miles in diameter, and much like theories existing today, Symmes believed that such openings would exist at the North and South Poles.

Symmes took his theories a step further, and began to scour the ranks of his aristocratic acquaintances (these included several heads of state and politicians), asking for funds to finance an expedition to the North Pole. “We will find a warm and rich land,” he said, “stocked with thrifty vegetables and animals, if not men, on reaching one degree northward of latitude 82.” Thus began mankind’s race to the North Pole, which in the minds of some, seems to have never ended.

Of course, geological evidence suggests a variety of different theories which, although incomplete, seem to dispel the notion of a hollow Earth. Take for instance the fact that Earth’s core is observable through monitoring vibrations created by earthquakes and seismic activity. As these vibrations pass from one side of the planet to the other, geologists are able to essentially “map” the structure of mantle, as well as the outer and inner core. A hollow earth, we can assume, would behave a bit differently under such observation (although it is interesting to note that the Earth’s Moon exhibits strange “ringing” effects that many claim to be indicative of a hollow structure). Also, according to Newtonian physics, a person in the depths of the Hollow Earth would appear virtually weightless, since Newton’s shell theorem states that “if the body is a spherically symmetric shell (i.e. a hollow ball), no gravitational force is exerted by the shell on any object inside, regardless of the object’s location within the shell.”

Perhaps the weakest argument used to dispel Hollow Earth theories involves the Kola Superdeep Borehole, a scientific drilling project of the former USSR. In the early 1970s, the project attempted to drill as deep as possible into the Earth’s crust, beginning in May 1970 on the Kola Peninsula. The operation implemented then state-of-the-art Uralmash-4E and Uralmash-15000 series drilling rigs, which succeeded in producing a number of boreholes branching from a central hole. The deepest, SG-3, was achieved in 1989, and reached only a little over seven and a half miles, and remains the deepest hole ever drilled. Considering the immensity of the Earth as a whole, this distance is minuscule, and hardly rules out cavernous systems that might extend into the depths (which, nonetheless, remain contrary to the notion of a Hollow Earth). This project inevitably led to the urban legend of a “Well to Hell“, popularized on programs like Coast to Coast AM by host Art Bell in the late 1990s.

At present, little (if any) evidence exists that there could be a hollow interior that exists within the Earth, much less a forested, warm and happy land as proposed over the last couple of centuries. The fiction of those like Jules Verne inevitably led to the stirring of imaginations everywhere, and although there are indeed modern proponents of such fantastic realities beneath us, the idea of a “Hollow Earth”, at very least, remains a fantasy. Of course, when it comes to caverns and creeping cave systems extending into the depths, we may yet to have scraped the surface as to what strangeness could exist below…

4 Replies to “Holes in the Poles: Hollow Earth Madness, or Fata Morgana?”