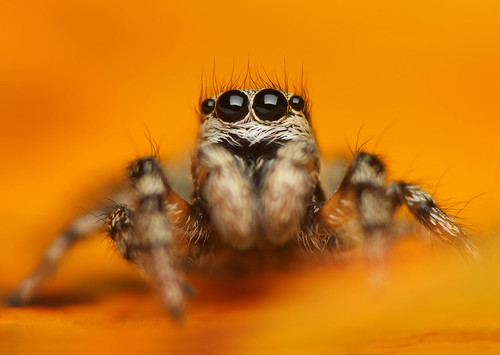 We’ve seen many variations of robotic creations over the years that mimic the way nature around us works, occasionally attempting to implement life-like devices that carry out work that humans might not otherwise be capable (or desirous) of doing. Examples range from automated carpet cleaners that buzz around suburban homes, to the sophisticated–and controversial–CIA drones that monitor areas where enemy combatants operate, capable of sniping individuals from a distance via remote control operation several miles away.

As time goes on, the trend is that technology seeks to consolidate mechanisms and devices into smaller and smaller locales, mostly for sake of convenience. However, a new achievement recently disclosed in the British journal Nature reports that a tiny, four-legged spider-like robot has been created that is so small it can literally crawl along a track composed of strands of DNA! (Image above courtesy of Lukjonis)

The robot itself is comprised of DNA, and is a mere four billionths of a meter in diameter, and its function exemplifies brilliance in every capacity. The body of the little robotic creation is constructed from a protein called streptavidin, from which three strands of enzymatic DNA protrude, functioning as “legs” which both bind to and cut DNA as it moves along. A fourth leg also mounts the spider to its starting point as its other “limbs” carry out the act of moving it along a biochemically predetermined path. This study, along with future innovations that will capitalize and expand on the science behind it, are hoped to pave the way toward creating a variety of “nanobots” that can perform functions on the molecular level, as well as a variety of other locations too tiny for humans to reach.

Some primative attempts at augmenting nature in similar ways have been lees than successful; take for instance the failed 1960s CIA project, dubbed Operation Acoustic Kitty. Rather than building the semblance of a creature from scratch (something technology today might allow), several decades ago the CIA opted to “bug” a living cat with batteries, recording devices, and a wire inserted into its tail to serve as an antenna. The cat was even “modified” to ignore hunger and other impulsive behavior. “They created a monstrosity,” recounted former CIA officer Victor Marchetti of the incident. On it’s maiden mission, the cat was released onto a park bench in Washington DC with intent of “spying” on a pair of individuals nearby. Only minutes later, while attempting to cross a busy street, the poor feline was struck by a moving vehicle and killed, along with a reported $15 million investment.

Thankfully, time has shown us more humane methods of using nature to our advantage… or so we hope. Who knows creations of tomorrow will be strolling along our synapses?