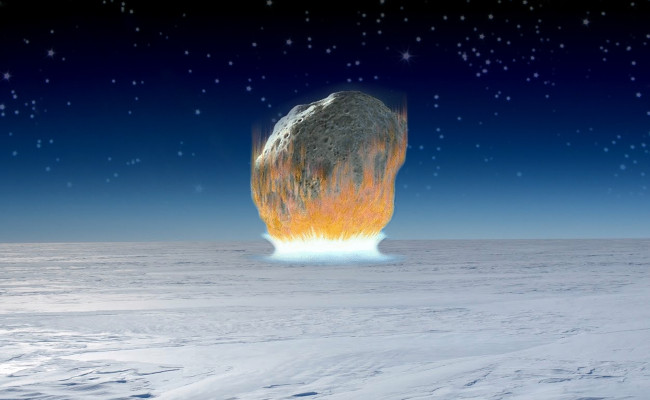 On September 2, 2004, scientists were puzzled by a strange series of mixed messages being received around the globe. By all intents and purposes, their source appeared to be extraterrestrial in origin; but these weren’t dispatches from intelligent life from outer space. They were in the form of infrasound signals detected around the globe, emanating from a mystery blast that had occurred somewhere on Earth.

Six infrasound detectors located in different parts of the globe had registered an impressive explosion, estimated to have been on par with the detonation of 12,000 tons of TNT, with the likely epicenter being someplace in Eastern Antarctica.

Nearby at Antarctica’s Davis Station, researchers had also noticed what appeared to be some kind of dust trail in the sky above them at the time. However, only recently was an impact crater spotted that suggests the location of the blast, providing new clues about the meteorite which caused it. The discovery has left experts wondering how such a force could remain mysterious for so long, and only partially explained until now.

The discovery of a massive, mile-wide “scar” on Antarctica’s ice sheet occurred during a recent aerial survey, suggesting that a house-sized meteorite struck there at the time of the blast detected in 2004. Scientists with the Alfred Wegener Institute in Germany were surveying the area using ice-penetrating radar, as well as magnetometers for detection of geomagnetic anomalies when they discovered the massive crater.

The crater was spotted by Dr Christian Müller as he and team members were flying over Eastern Antarctica in a Polar 6 aircraft equipped with scientific equipment. Dr Müller shared his observation of the anomalous shaped area with researchers at the Davis Station, and found that a study from 2004 had noted the unusual infrasound readings at that time, estimating that a house-sized space object may have been related to the incident. It is believed that the meteorite had broken apart as it fell through the sky toward Earth.

Such discoveries raise the inevitable question of how often large, and potentially destructive, meteorites actually strike the Earth. Any house-sized object like this striking closer to a major population center would have catastrophic results. However, following incidents like the 2013 Chelyabinsk meteor over Russia, new, more effective scientific methods of detecting asteroids and other potentially harmful space objects have been proposed. It is hoped that the expected innovations of 2015 will include technologies that will assist in an early warning system to detect such dangers before they’re at our backdoor.

Correction: The impact in question actually transpired on the date of September 2, 2004, rather than three months later, as had been previously reported here.