In the 16th century, a long-held legend about a supposed restorative fountain, the waters from which could reverse the effects of aging, began to appear again with fervent interest.

This was no doubt as a result of rumors the likes of which appeared in the published memoirs of Hernando D’Escalante Fontaneda, who wrote of Spanish explorer Juan Ponce de Leon’s supposed search for a “fountain of youth” while surveying the New World. Fontaneda more specifically described a river called Jordan, that possessed such magical youth-restoring capacities. It was supposedly long-lost, though even in Fontaneda’s estimation, it was perhaps more likely to be non-existent.

The legends about waters that could restore youth, or at very least prolong one’s lifespan, have much earlier roots. An equally tantalizing account, though of slightly more thorough detail, appeared in the writings of Herodotus, who recounted the land of the Macrobians, of whom it was said that “most of them lived to be a hundred and twenty years old, while some even went beyond that age.” Apart from a diet mostly consisting of boiled fish and milk, there was another staple of their existence to which they credited their prolonged lives:

“When the Ichthyophagi showed wonder at the number of the years, he led them to a fountain, wherein when they had washed, they found their flesh all glossy and sleek, as if they had bathed in oil, and a scent came from the spring like that of violets. The water was so weak, they said, that nothing would float in it, neither wood, nor any lighter substance, but all went to the bottom. If the account of this fountain be true, it would be their constant use of the water from it which makes them so long-lived.”

This account, like many of the recollections in Herodotus’ writings, at best seems fanciful; as would the the notion of anything similar to a “fountain of youth” being uncovered during excavations around the enigmatic faces that famously tower over Easter Island. But in some rare cases, truth can prevail in being stranger than it’s fictional cousin, and here, one of our world’s most famous ancient mysteries may have hidden a key to the future… and anti-aging science.

A recent cover story in Bloomberg Businessweek featured the story of biochemist Suren Sehgal, and how he stumbled onto what may be the “holy grail” of anti-aging science; of all places, this mysterious link to what may promise greater human longevity was unearthed from beneath one of Easter Island’s stony heads:

A Canadian medical expedition had collected the soil from beneath one of the mysterious stone heads on Easter Island, a speck in the middle of the Pacific Ocean. In the dirt, Sehgal had discovered Streptomyces hygroscopicus, a bacterium that secreted a potent antifungal compound. This intrigued him; he thought perhaps it could be made into a cream for athlete’s foot or other fungal conditions.

He purified the stuff and named it rapamycin, after Easter Island’s native name, Rapa Nui.

A test presented itself when one of Sehgal’s neighbors became afflicted with a skin condition, for which Sehgal created an ointment with his rapamycin that effectively worked as a cure.

“Over the past decade, it has shown promise as a drug that not only can extend life by delaying the onset of ageing-related diseases such as cancer, heart disease, and Alzheimer’s disease, but also postpone the effects of normal ageing,” Bloomberg reports.

Looking back to the ancient Macrobians, an interesting parallel to modern anti-aging science may actually be found in the diet these ancient people had consumed; as Herodotus had noted, their diet had consisted of “boiled fish and milk”. Fish is a staple of dietary recommendations for consumption of Omega-3s, and as the introduction to Bill Gifford’s Bloomberg article notes, salmon and mackerel are chief among these fishy food sources, along with avocados, the large green fruit (botanically a berry, actually) once believed by bodybuilders to be avoided due to being “pure fat.”

While rapamycin may prove hopeful for measures in creating an actual “forever pill”, as the Bloomberg Businessweek article describes, many are still hesitant to leap onboard. The article quotes S. Jay Olshansky of the University of Illinois at Chicago, one of the premiere critics of life-extending drugs and their use. “There are no interventions that have been documented to slow, stop, or reverse aging in humans,” he told Bloomberg. “The batting average is zero.”

Tell that, of course, to futurists like Ray Kurzweil, who has continued to promote not only anti-aging science, but also the idea of humans extending consciousness–and thus, life–indefinitely, by perfecting an eventual process of uploading human minds into a non-biological carrier. Such concepts formed the basis of the 2014 film Transcendence starring Johnny Depp, in which a dying researcher’s mind is successfully uploaded to a computer, from which he seeks to innovate technology capable of reanimating himself.

Granted, rapamycin may not be the “miracle drug” for anti-aging just yet, as present studies in mice show that, while it effectively regulates the mTOR gene conducive to prolonging life by about 20%, mice who have rapamycin incorporated into their diets also tend to be 30% smaller on average, and also show some signs of loss of testicular function, in addition to a propensity for developing cataracts, as well as the onset of diabetes. Similar observations have been made with humans who have taken rapamycin to help prevent the body’s rejection of transplanted organs following a kidney transplant.

Currently, the proponents of anti-aging technologies still hope to be able to make drugs available within the next few years that will increase human longevity by considerable amounts. The average lifespan of humans could well exceed 120 years according to experts; an interesting parallel in that it roughly matches the lifespans of the fabled Macrobians of Herodotus’ writings, thanks to their fabled and mysterious fountain of youth.

Perhaps modern medicine is finally catching up with these fabled people, thanks in large part to an unprecedented discovery at another site among our world’s mysterious ancient wonders. 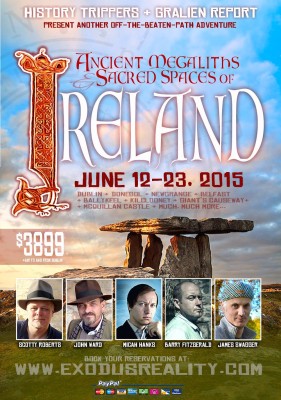 Join The Gralien Report in Ireland this June 12-23 for the “Ancient Megaliths and Sacred Spaces of Ireland” tour. Space is limited, so visit www.ExodusReality.com for details.