Amazing Manimal: Bonobo with Brains Has a Penchant for Pan-Frying 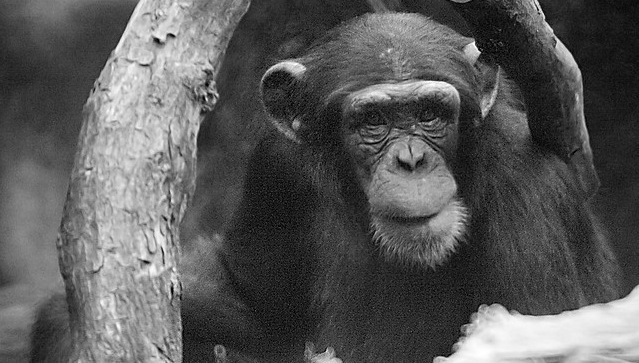 For many, Iowa is heating up to be a prime indicator of how the political field is about to turn in 2012; but for one researcher, there is another fascinating story involving heat that may lend itself to rethinking the intelligence of some of our cousins in the animal kingdom.

Every year, we are able to look back on the last twelve months or so with certain wonder with regard to some of the items that captivated minds everywhere and became newsworthy. Many are the instances where such stories involve our animal kindred, and the amazing feats they manage to accomplish that sometimes leave us thinking, “gee, maybe we aren’t all that different, after all.” Such was the case for me, when I first observed photos of Kanzi, a bonobo from the Great Ape Trust in Des Moines, Iowa, who has been in the care of Dr. Savage-Rumbaugh for a number of years.

Kanzi Cook-Out: A Bonobo with a Passion for the Blaze

There are many striking things that bonobos and chimpanzees have managed to learn to do over the years, ranging from swimming to the use of tools. Therefore, it was particularly “striking” (and you’ll have to pardon the intentional pun here), when Savage-Rumbaugh began to observe Kanzi striking matches, lighting fires, and cooking food in a frying pan!

Remarkably, Kanzi has learned to build fires, after apparently having been fascinated with programs about man’s quest for fire in ancient times when he was a young chimp. After observing his caretakers, Kanzi began to copy them, and now, under close supervision, is allowed to cook small items over the fires he builds; he even roasts marshmallows on a stick, much like the happy campers he has observed over the years.

There are, of course, a number of extraordinary possibilities this presents, as reported by the Daily Mail recently. Among these is the question of whether Kanzi can teach other chimps to use this sort of behavior, or even if a chimp like Kanzi, released into the wild, might be able to learn to harness fire in a natural setting (i.e. without the use of matches).

The implications are indeed startling, and offer us a unique glimpse at how our ancient ancestors may have begun to harness the heat of flame for the first time. This is, of course, interesting to those of the Fortean persuasion for slightly different reasons; namely, it evokes in our minds

2 Replies to “Amazing Manimal: Bonobo with Brains Has a Penchant for Pan-Frying”