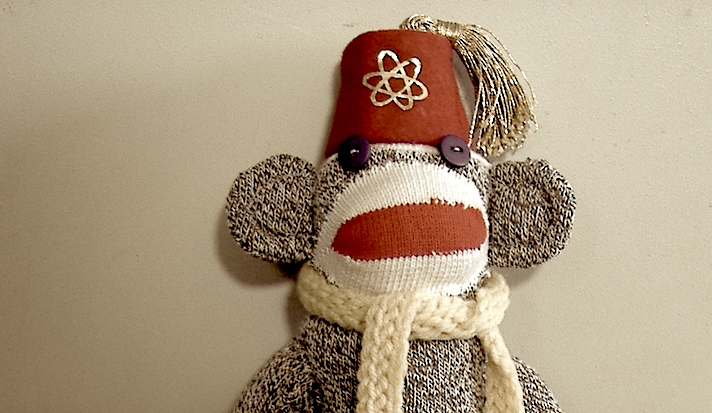 How I Sort of Came to Terms with Spirit Guides

This story begins with a bleeding monkey who terrorized my Son.  Keep in mind when I write “Bleeding Monkey”, this was an unknown creature, only seen sometimes. In 2011 (rough estimate) I began a highly spiritual journey and started meditating on a regular basis.  I would do group meditations weekly, attend extensive meditation weekends, and practice meditative techniques daily.  My son was around 3 at this time.  My Son never liked bedtimes and furthermore he hated being by himself, so when the screaming to not want to be in his room started; I attributed this to a child being a child.  When the fear escalated day after day for weeks on end I began to realize, things were not right.  He started telling me things, saying there was a monkey in a corner in his room and it would hold him at night.  A lion would kick him in a bucket.  One day, the “monkey” was bleeding.

I will add, I am a skeptical believer.  I have had paranormal things happen to me my entire known life and experienced things that aren’t normal every day events.  I understand that there is a world out there we do not always see, but I also have a healthy dose of skepticism.  I think things through before assuming.  I test what I can test.  Sometimes, there is no reasonable explanation, except for the paranormal one.

Let’s back up a tad bit here.  My Son’s bedroom was originally a computer room when I bought my condo.  I rarely went in that room because I never liked its feeling.  The corners of the room that you saw when you entered the doorway bothered me so much I avoided the room.  When I was pregnant, the room was converted into his room.  I never did any cleansing work in that room (in all honesty, I didn’t think of it).

Back to the story…

Without going into all of the details, this entity grew.  I mean that in the size of it, the frequency in which it would show up, and the fear.  I ultimately realized this entity was probably a doing of mine.  My spirituality was growing, so other things came out to play.  They realize who can see them and weaknesses, per say. My psychic abilities [I have been able to see entities and spirits my entire life, have communicated with the dead and animals from a semi young age (beginning in the teens) and have been a channeler] had always been sporadic and not in my control. When this came out, I couldn’t do anything about it because of my own fear. Logically I knew – from my previous encounters – you can ignore them, you can tell them to go away, and you can do a number of things to have a spirit leave you be.

In this instance I had motherly instincts playing with my mind. I had a new openness in me I did not have complete understanding of or control over, so I began reaching out to people.  A family member gave a reading for my Son and a lot of people kept telling me to call on my Son’s spirit guides for help. I did a lot of research and ended up having so many items and rituals done in his room; I burnt a white candle in there, dill in the corners, smudged the room and blessed the room (done as a Oneness Blessing).  A good paranormal pal of mine and I (Jonathan Wilson) did research trying to find other instances of this type of being, and came up with nothing conclusive.  During this time, there came another spirit that sat in the opposite corner – just watching things every night.  The monkey grew in size, and towards the end of this monkey adventure,  it had horns and was 6 plus feet tall. It would move around the room too, no longer in the one corner. Eventually, I found the strength in myself and told it that it had to go away.

I believed in myself and I knew that I could make it go away.  I put my Son to bed one night and after he was asleep I pointed my finger sternly at the monkey and told it that it was no longer welcome here.  I cannot help it, it has to leave.  This went on for 3 days.   The first day, I was lying against my Son’s bed and I spoke out loud, “I do not know if I believe in you, but if you are real, I need [my sons name]’s spirit guides to come and help him”. I then saw 3 beings float down (one in the front and two in the back).  The two in the back were vague; I received a very male impression from one of them.  The one in the front I perceived as female, she was what I thought was the “leader”.  I walked out of the room in a sense of peace, and quite incredulous. I sat down on the couch in the living room and the entire condo was filled with these fast moving shiny objects.  So many different beings floating and darting through my home and I could do nothing but sit and watch. So, in the end, it worked.  The bleeding monkey left, the ghost in the corner stuck around for a few weeks, watching.  Everything was fine.   For a couple years afterwards my Son would bring up the monkey, recalling it like it was an event that he was glad was over.

Let’s move a head a few years.   After seeing and experiencing this I still cannot bring myself to believe in a spirit guide.  I have always known about them, but could never really believe in them.  After calling them to come and seeing them, I still could not believe it.

My interest in this subject grew to the point that in early 2014 I started researching this topic more.  I came to the ultimate conclusion that I will need to experience this further to gain anything from it. I tried talking to my spirit guides; obviously it didn’t work because my belief was not there.   So I located a guided meditation to find your spirit guides.

It was indeed relaxing, the voice and the meditation was soothing and really brought you into a comfortable place.  As it went on (the meditation last a little over an hour) you start to be brought into a place where you can see.   When I was brought face to face with my guide, there were three beings in the room with me. One was my guide, as I took it and the other two were in the back of the situation.  One was the female guide I recalled seeing with my Son and the other was a grey alien. I was logically confused by their presence, but accepting none the less.  I asked the grey alien why it was there.  The impression I received was that it was a watcher (same for the female being, but a watcher in a different way).

I did not get any further with them and turned my attention on to the spirit guide.  It was sparkling, white, flowing and long.  It stood above me and at me.  After a period of time I became quite afraid of this thing.  So afraid I stopped the meditation short. I was then left pondering this occurrence.  Why are there watchers… why an alien and a grey alien, at that?  Why is this female with my Son and I?  Why am I afraid, so very afraid of this beautiful sparkly being?

I resolved that I needed to do this again.  I was starting to believe, in a way, of this idea of a guide. I did the meditation again, in a group setting, sometime later. This is what I saw…I floated back up to my room that was high in space. All around is a vast beautiful starry night. My room is grand and I look for the alien and woman.  I do not see them, but I do see my guide – white and sparkling, but no longer as long.  There is also an empty blackness where a face would be, no fear this time.  I try bringing up the fear in myself to try to match the experience and the fear is gone.  My guide and I have a conversation; it is deep in its meaning and awfully heated in nature.  I become upset at the topic, but still no fear and my belief in this is changing…. solidifying.  I am seeing that this guide is my self, the me who has been around for a while, more than just this life. During the conversation, I come to terms with issues and make realizations based on the topics at hand in our intense conversation. It was a fulfilling experience that I plan to do again.

Do I now believe in spirit guides? Sort of.

I am coming to terms with a lot of things I did not fully believe in.  I am realizing that words are words.  They have connotations that may not as accurate as needed.  I am also realizing there is more to this story than originally expected.

Lindsay Morrison is a regular news contributor to The Gralien Report. Her areas of expertise include the use of essential oils and the benefits of meditation for general wellness. You can learn more about her work at her Cincy Oneness website, as well as her doTERRA Essential Oils page.