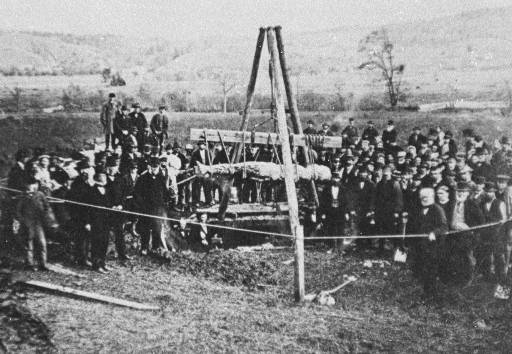 Over at Mysterious Universe I recently blogged about a new book two of my favorite Forteans, Loren Coleman and Mark A. Hall, are working together on, titled True Giants: Myth, Legend, Folklore, and Fact. The book, according to Coleman, will deal with lesser-known reports of Bigfoot-like animals seen throughout the Pacific Northwest that are much larger than typical Bigfoot reports (sometimes described as being 20 feet tall)! This is an extraordinary claim, but nonetheless one worthy of consideration from folkloric perspectives, particularly in how they pertain to Native American legends and history.

Take for instance legends shared among the Cherokee in the South Eastern United States, where legends dating back several centuries described “slant-eyed giants” that traveled from the west, and after befriending the Cherokee, stayed with them for a period before returning to their home in a distant land unknown to the Cherokee. Such reports were first gathered in the late 19th century by anthropologist James Mooney, who wrote about such legends in his book Myths of the Cherokee. Incidentally, the Cherokee god of the hunt, Tsulkau (later bastardized by the English into “Judaculla”) was described as a man of tremendous stature, fitted with the now familiar (and somewhat peculiar) trait of slanted-eyes. Who were these “slant eyed giants” that were meeting the Cherokees and other indigenous tribes throughout the United States prior to settlement by Western Europeans?

Perhaps another clue lay hidden in this recent tome of Fortean strangeness and folkloric interest, The American Goliath, as reviewed by my partner in crime Nick Redfern over at his There’s Something in the Woods blog. “I have contributed a section to the book on the weird saga of the notorious Cardiff Giant,” Redfern explains. “The story of the hoaxed Giant is an entertainingly strange one; and one that – as you’ll see from my section of the book – is getting even stranger.” Be sure and give this one a look, ladies and gents.