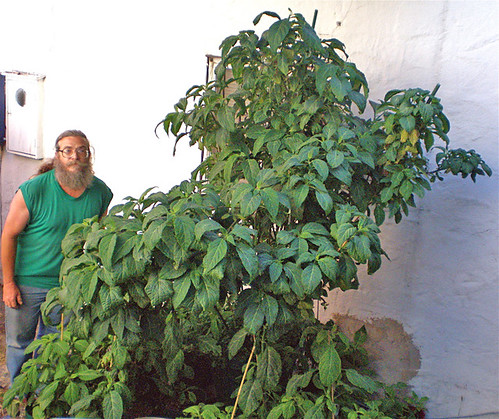 Over at the Mind Hacks website, I was astonished to read about a recent study, in which scientists observed videos of individuals under the influence of the hallucinogenic plant Salvia Divinorum posted to the popular site YouTube. From these e-observations (using a process commonly referred to now as “armchair anthropology”) the study claims that five new groups of effects the substance has on its users were identified. This was based on 34 videos observed by researchers, the study says.

Before getting to the aforementioned categories, I must say I was a bit shocked by this bit of research for a number of reasons. First of all, the observations made are based on things which were videotaped by recreational users of hallucinogenic substances, then subsequently posted on the Internet. Although I am an advocate for considering the potential economic and political benefits we might garner from legalization of certain substances for medical and personal use (namely marijuana, for which many states are already taking measures to create legal markets for its sale), it must also be acknowledged that recreational use of many substances–particularly the more potent psychedelics available today–can be very dangerous and potentially deadly. Because of this, what other circumstances should be considered pertaining to the study in question?

Granted, debating the ethics or legalities of drug use is not our present consideration, especially since the hallucinogen in question, Salvia Divinorum, is already legal in many areas. But when discussing the recreational use of any substances with potent mind-altering effects, questions based on moral and legal principles inevitably come into question. That said, the fact that videos online of individuals engaging in this behavior now serves as the basis for scientific study (apparently by San Diego State University’s Prevention Science Collaborative) seems a bit unusual altogether.

Additionally, when compared alongside previous studies with hallucinogens, it seems that a controlled setting such as those created in the past might have contributed to a more consistent body of knowledge. Take for instance the DEA-approved clinical research performed in the 1990’s by Rick Strassman M.D. that involved DMT, arguably one of the most powerful psychedelics available today and, ironically, one produced within the human body (I spend a good bit of time on this subject in Magic, Mysticism and the Molecule). On the other hand (and before I start sounding too damning of the circumstances surrounding the recent Salvia research in question), let’s take into consideration the potential benefits as well. First, Salvia is, at present, legal in many states. Second, by watching videos posted online of individuals getting a “legal high” off the stuff, arguably the researchers are shown a “window” into how recreational use of similar substances might affect individuals in environments other than those clinical in nature. In other words, taking “setting” into consideration, environmental factors within, say, a hospital room might affect the participants in much different ways than those depicted in the videos used in the study.

But setting some of the more serious debate aside, the categorization resulting from the study were as follows:

(1) hypo-movement (e.g. slumping into a slouched position, limp hands, facial muscles slack or relaxed and falling down), (2) hyper-movement (e.g. uncontrolled laughter, restlessness, touching or rubbing the face without apparent reason or thought), (3) emotional effects included being visibly excited or afraid, (4) speech effects (unable to make sense, problems with diction, problems with fluency, inability to speak, and having problems recalling words) and finally (5) heating effects related to being hot or heated (e.g. flushed, or user makes a statement about being hot or sweating).

So how will such information continue to shape the way science interprets the use of such substances? Do you find this sort of thing more helpful or hindering to the advancement of our understanding of nature and the world around us?