Brad Steiger sends us the video above, which features an “attack” by a Golden Eagle in Montreal, Canada. “Since I was a kid, I have heard it debated: Could/would an eagle carry off a baby or small child?” Steiger asks. “This remarkable video may settle some arguments–at least about an eagle’s intent.”

When I first saw the video above, I wasn’t certain it was actually real. Like many purported UFO videos, we see from the outset that the videographer is focused on the bird in flight. It comes soaring along, circles back around, and then suddenly swoops down to lift a toddler into the air. Fortunately, it appears that the toddler here was too heavy a load for the avian attacker to carry for long.

UPDATE: You know what they say when something looks too good to be true? Ah yes, as we suspected initially, the old adage seems to have proven true yet again… this video is a CGI hoax. Thanks to Billy Sanders and RPJ for the links.

So does this video finally prove that large birds can attack children? If so, it wouldn’t be the first time…

Of course, amidst the wide variety of stories involving “winged monstrosities” in Forteana, this video also reminds us a bit of a classic tale from the annals of cryptozoology, involving a purported “thunderbird” attack. Apparently on the evening of July 25, 1977, reports of two very large birds caused quite a stir near the community of Lawndale, Illinois, when residents claimed to see these creatures circling in the sky. One report maintains that three young boys who had been playing in the backyard of a home owned by Jake and Ruth Lowe had been “targeted” by these birds. Swooping down much in the same manner as the video above, Jake and Ruth’s ten-year-old son Marlon was allegedly grabbed by one of these creatures, and carried a short distance as he struggled to fight his way free. 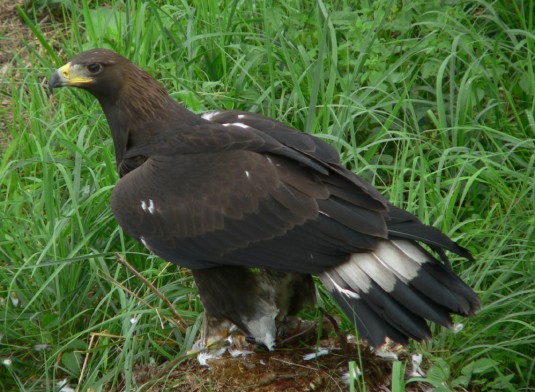 According to the initial report of Ruth Lowe, Marlon was carried by this large bird approximately forty feet, although the weight of the ten-year-old fortunately prevented the child from being carried to a dangerous altitude by the mystery bird. Ruth had been convinced, however, that the creature might have succeeded in kidnapping here child, had it not been for the fact that the boy’s cries alerted her attention to the situation, drawing her outside. Other adult witnesses to the events in question purportedly saw two large black birds in the vicinity, with raptor-like beaks that curved downward, as well as what looked like “bands of white” plumage circling their necks. Their wingspan appeared to be approximately ten feet in width, as the two airborne attackers ascended and few off over the nearby Kickapoo Creek. Similar reports of large birds would occur in the days that followed over nearby towns that included Bloomington, Downs and Tremont, among others.

What do you think? Act of nature, or a Hitchcockian nightmare about to unfold? You decide…