The JFK Files: These Are the Weirdest Things We Learned From the October 2017 Release

In October 2017, the long-awaited release of thousands of documents relating to the 1963 assassination of President John F. Kennedy occurred. While a large portion of documents were withheld at the last minute, due to appeals from intelligence agencies who requested more time for review of the files in question, the Trump administration still managed to approve the release of a trove of information, some of which revealed new details about the one of the darkest days in American history.

Among the released files were a few surprises, such as apparent foreknowledge of the incident, as implied by a mysterious phone call to a British news service just minutes before the assassination occurred. Other files lent to speculation involving long-standing conspiracy theories, such as the claim that Lyndon B. Johnson had been involved in a secret plot to kill Kennedy.

Here, we present our collection of what we believe to be the most compelling, or otherwise unusual files from the October 2017 release:

1. Somebody tipped off a British newspaper about “big news” 25 minutes before Kennedy was assassinated.

Arguably one of the most explosive documents from the entire release, a memo dated 23 November, 963, addressed to FBI Director J. Edgar Hoover discussed an anonymous phone call placed to a British newspaper, which seemingly forewarned of Kennedy’s assassination 25 minutes prior to the incident.

According to the memo, “The British Security Service (MI5) has reported that at 1805 GMT on 22 November an anonymous telephone call was made in Cambridge, England, to the senior reporter of the Cambridge News. The caller said only that the Cambridge News reporter should call the American Embassy in London for some big news, and then hung up.”

“After the word of the President’s death was received, the reporter informed the Cambridge police of the anonymous call and the police informed MI5. The important point is that the call was made, according to MI5 calculations, about 25 minutes before the President was shot. The Cambridge reporter had never received a call of this kind before and MI5 state that he is known to them as a sound and loyal person with no security record.” 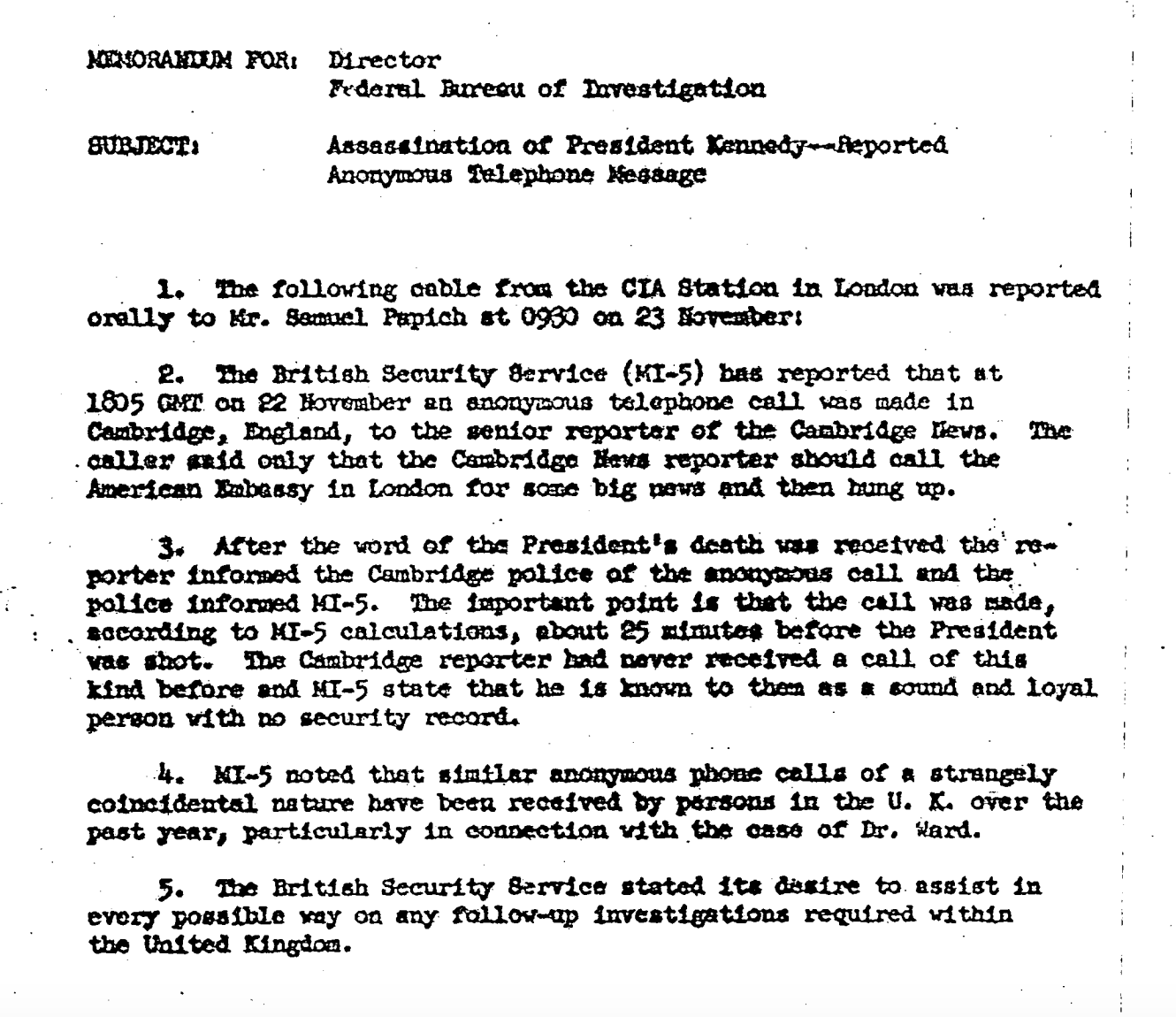 The memo goes on to say that similar anonymous calls had been made to “persons in the U.K. over the past year, particularly in connection with the case of Dr. Ward,” in reference to  Stephen Ward, an English osteopath who became a central figure in the 1963 Profumo affair.

Michael Eddowes, a lawyer who investigated JFK’s assassination, believed the secret informant that placed the call to Cambridge News was Albert Osborne, a British-born Soviet agent. “The Soviet Union was eager that the assassination should be seen as a conspiracy,”  Eddowes said, further stating his belief that Osborne may have learned about the assassination plot by befriending Lee Harvey Oswald.

Although certainly one of the most revealing documents in the recent release of JFK files, this was by no means the only unusual phone call made the day of the assassination. In fact, a phone call made by none other than Lee Harvey Oswald later the same day, while in custody of law enforcement, presents other possible clues to what happened in Dallas that day in 1963.

According to an article that appeared last October in the Raleigh News and Observer, “In August 1977, the House Select Committee on Assassinations, created to do a new investigation, received information that Oswald allegedly tried to place a call from jail to a man named John Hurt in Raleigh, according to an internal report written by Surell Brady, a senior staff counsel to the committee.”

John Hurt had apparently worked previously in U.S. counterintelligence, and had visited Duke University Hospital seeking therapy shortly before the assassination. There is little  information about what the relationship may have been between the two men; Hurt either declined the call from Oswald, or had been away at the time the call was made.

2. Jack Ruby told an informant to “watch for fireworks” just prior to JFK’s assassination.

According to a memo dated November 22, 1963, a Group Manager in the Dallas Intelligence Division named Arlen Fuhlendorf was given information from a confidential informant with information pertaining to the assassination.

“The informant stated that on the morning of assassination, Ruby contacted him and asked if he would ‘like to watch the fireworks.’ He was with Jack Ruby and standing at the corner of the Postal Annex Building facing the Texas School Book Depository Building at the time of the shooting. Imnediately after the shooting, Ruby left and headed toward the area of the Dallas Morning News Building.”

The obvious insinuation had been that Ruby had some degree of foreknowledge about assassination, although little additional evidence for this, whether from newly released documents, or from existing testimony provided by Ruby.

3. Was there evidence that Lee Harvey Oswald had worked for the CIA?

In what is arguably the biggest cliffhanger of the entire JFK release, a document titled “Deposition of Richard McGarrah Helms, April 23, 1975”, a dialogue between David Belin Esq. and Helms presents the following tantalizing exchange:

MR. BELIN: Well, now, the final area of my interrogation relates to charges that the CIA was in some way conspiratorially involved with the assassination of President Kennedy. During the time of the Warrant Commission you were Deputy Director of Plans, is that correct?

MR. HELMS: I believe so.

MR. BELIN: Is there any information involved with the assassination of President Kennedy which in any way shows that Lee Harvey Oswald was in some way a CIA agent or an agent

At this point the document ends abruptly, as the remainder of the file appears to be missing, thus omitting any additional information Helms might have offered about Oswald’s possible relationship with the CIA.

However, there may be data elsewhere that at least suggests why questions may have existed about such a possible connection; some of this could have to do with presumed visits Oswald made to Mexico before the assassination, and whether the CIA had been involved in surveillance of his activities.

According to Politico Magazine:

“After the assassination, there was special confusion within the FBI and CIA over reports that telephone calls in Mexico City—on phones tapped by the CIA—suggested that a man claiming to be Oswald in calls with the Soviet and Cuban embassies was someone else; the voice sounded different. Was the caller actually working for the CIA? That seems possible, if only because the CIA’s Mexico City station had a program of trying to intercept potential Americans defectors or spies who, at the height of the Cold War, regularly showed up at the door of Cuban and Soviet embassies in Mexico. Was it possible that the CIA, learning of Oswald’s arrival in Mexico, sent an agent to intercept him before some of his planned meetings with Cuban or Soviet agents, or that a CIA agent pretended to be Oswald in some of the phone calls?”

Whatever was really going on, it could be that rather than Oswald working for the CIA, there may have been CIA operations that involved an impersonator, in a broader effort to determine his role as a defector.

4. Russia claimed to have knowledge of a “well organized conspiracy” involving Lyndon B. Johnson to assassinate JFK, and that the KGB was working toward “solving the problem.”

According to one FBI memo from 1966 forwarded to Marvin Watson (Lyndon Johnson’s aide), a Russian mole had purportedly divulged information from Moscow about knowledge of a “well organized conspiracy on part of the ‘ultraright’ in the United States to effect a ‘coup’.” According to this narrative, the plot was aimed at stopping negotiations with the Soviet Union, in an effort to follow through with an attack on Cuba, “and thereafter spread the war.”

The memo details that following Kennedy’s assassination, “the Soviet Union immediately went into a state of national alert,” for fear of impending conflict between the two nations.

The same memo also states that the Russian source said “Soviet officials claimed that Lee Harvey Oswald had no connection whatsoever with the Soviet Union.” Further, Colonel Boris Ivanov, then Chief of the Soviet Committee for State Security under the KGB Residency in New York City, had stated at a meeting that “Kennedy’s death posed a problem for the KGB,” and that “it was necessary for all KGB employees to lend their efforts to solving the problem.”

5. Robert F. Kennedy was given warning about a book detailing his “close relationship” with actress Marylin Monroe.

Stories about sordid affairs between JFK and actress Marilyn Monroe are nearly the stuff of legend already, but according to a memo from the recently released files dated July 15, 1964, Robert Kennedy was warned that a scandalous book on Monroe’s death made similar allegations about the Senator.

“In my letter to you dated July 7, 1964, and cautioned as above,” the memo reads, “reference was made to a forthcoming book by Frank A Capella called, “The Strange Death of Marylin Monroe.” Throughout the book, and particularly on pages 49-61, 69, and 70, Capell claims that you had a close relationship with Miss Monroe. A copy of this book is enclosed.” 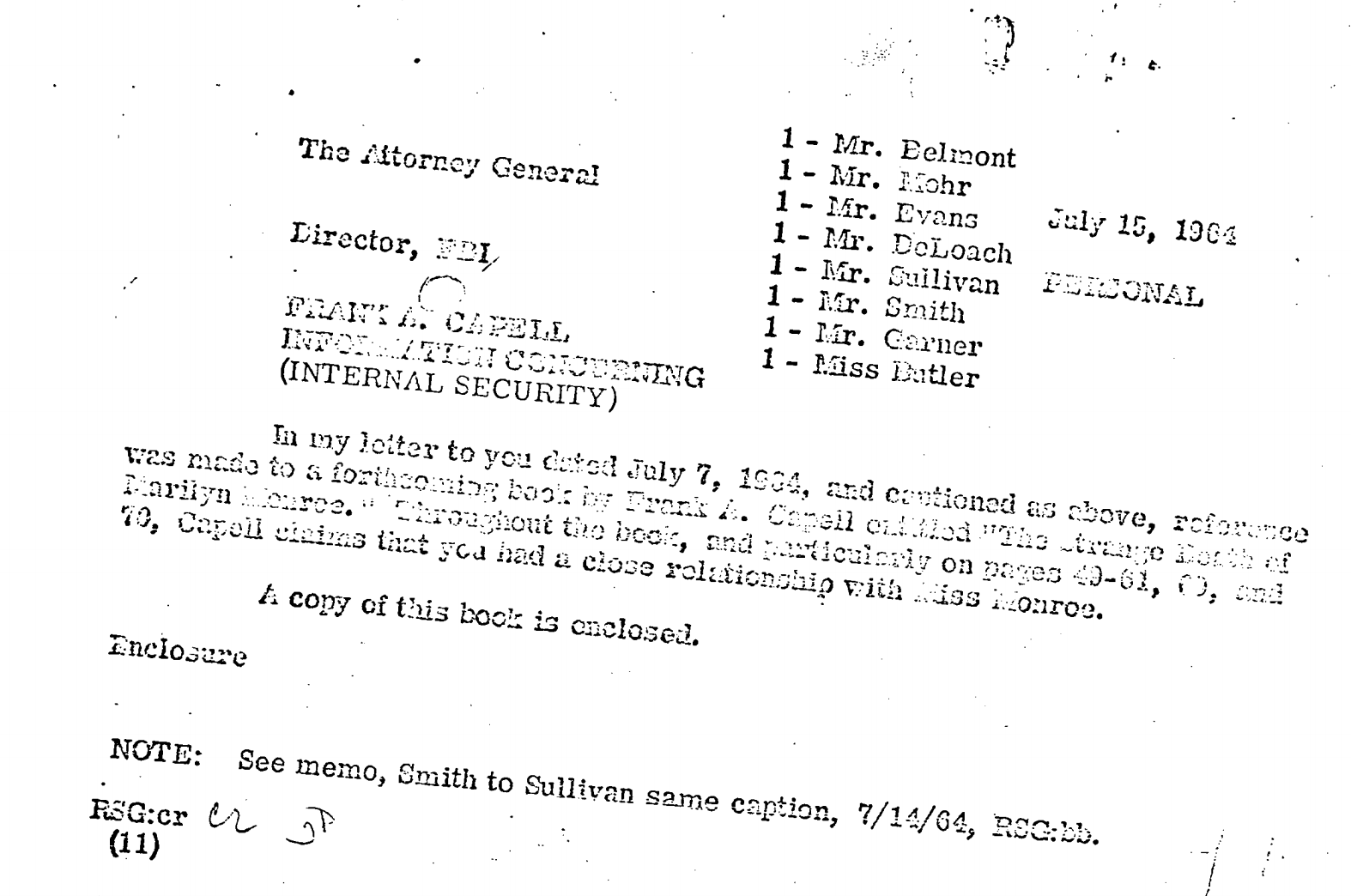 It is widely believed that Monroe had had relationships with both of the Kennedys. “[I]t was pretty clear that Marilyn had had sexual relations with both Bobby and Jack,” Monroe biographer James Spada told People magazine in 2012.

“What happened to Marilyn Monroe is one of the great mysteries of the 20th century,” Spada said, although he told People that he does not believe the Kennedys were in any way linked to the circumstances surrounding her death.

6. And the weirdest document of them all…

Arguably one of the strangest documents form the entire JFK file release, the memo below, dated November 25th, with no year given, presents a colorful briefing which uses a variety of coded elements, most notably the parentheses surrounding the word “assassination” (likely used to denote terms that were sensitive, or otherwise vell under certain secret clearance levels), along with bizarre, and almost comical “secret societal” references:

While there may not have been any particular “smoking gun,” the 2017 JFK files certainly presented a number of unique new leads, and perhaps a few with connections to existing questions about the assassination. While Oswald’s role as the individual solely responsible for killing JFK remains the accepted historical narrative, the most recent release nonetheless raises questions about individuals who may have had some degree of foreknowledge about his plans for Dallas on November 22, 1963 at Dealy Plaza.