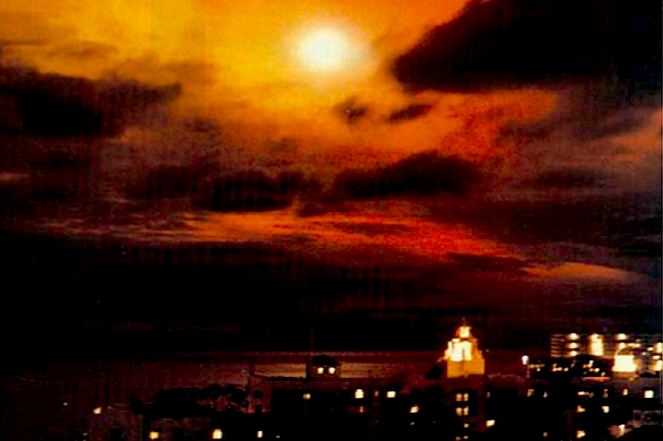 With the release of the latest trailer for this summer’s Godzilla reboot, there’s one thing we can walk away saying: it actually looks scary.

Set for release in theaters on May 16, 2014, the latest reboot for the famous giant monster stars Brian Cranston and Elizabeth Olsen. Setting a darker tone than any previous retelling of the famous story, the latest version maintains key elements from previous offerings in the Godzilla series: a prehistoric monster of gargantuan proportions is awakened from its ancient sleep beneath the Pacific Ocean, apparently with strength and abilities augmented by exposure to radiation during nuclear tests that took place there.

However, with the 2014 version, the newest trailer (above) takes an interesting new twist, hinting at Cold War era nuclear tests that had actually been attempts to destroy the giant monster upon its first discovery. Incidentally, much of the imagery in the early trailer releases, while dark and atmospheric, also remind us of visuals that accompanied actual high-altitude nuclear tests that occurred over the Pacific, such as Operation Starfish Prime (pictured at the top of this post) which lit the skies over Honolulu, Hawaii golden red well into the early morning hours on July 9, 1962 (you can read more about it here).

Godzilla films haven’t exactly built their reputation on the fright-factor of the moviegoing experience over the last several decades, catering more to the kaiju (giant monster) culture of “bigger is better,” and thus awesome… no matter how silly the rubber suits involved may be.

One notable scary exception in the long lineage of Godzilla films was director Ishiro Honda’s first Godzilla film, released in 1954. The 2014 reboot obviously pays homage to Honda’s original, with its themes of nuclear experimentation and its horrifying repercussions outline the real-life horror of war and nuclear destruction, the likes of which ended World War II with the destruction of Hiroshima and Nagasaki.

The upcoming May 2014 release is directed by Gareth Edwards, and the trailer (above) appears courtesy of Legendary Pictures.