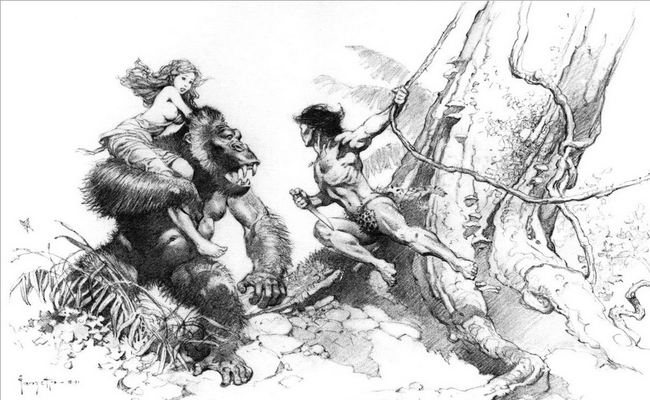 Reports of hairy humanoids in the Americas like Bigfoot have captured the public’s fascination for decades. The proposed existence of such creatures beckons to us, after a fashion, and hints at a primal element that even modern humans seem to possess after all these many thousands of years of evolution and pairing that have made us what we are today.

Most often, the stories we hear about Bigfoot entail creatures much larger than humans, but similar in their general bipedal posture, physiognomy, opposable thumbs, and other human-like traits they are said to possess. Larger than life in the very literal sense, the problem scientists face when trying to understand them is how such a creature, with their humanlike appearance and potential for intelligence, could exist undiscovered; save only for the scant recollections of those claiming to have had remarkable encounters with the things.

The encounters, as circumstantial evidence, must account for something: these “scant recollections” actually number in the thousands, and no single complete survey of all reports that have appeared online, in books over the years, on podcasts and radio shows, and which have circulated by word of mouth, has ever been organized and collected. Indeed, mass delusion on this scale would require a new understanding of psychology and the workings of the human mind, as well as a bleak new acceptance of the fallibility of the senses.

By contrast, the hard questions remain just as well: what would a group of creatures like Bigfoot consume, particularly in the remote regions of North America? Why have no bodies ever been recovered? For enough of a breeding population to exist, there would have to be enough of the creatures in existence for their regular appearances to occur; are the plethora of reports mentioned previously capable of accounting for this, and if so, why does the academic establishment still hesitate to take this subject seriously?

For the sake of conversation, let’s suspend our disbelief for a moment about whether or not such a creature could exist, and explore a hypothetical scenario involving human and Sasquatch relations that may be remarkably similar to another potential scenario in early human pre-history.

During a correspondence I had with an academic friend of mine recently, the subject of purported “Sasquatch kidnappings” in relation to the idea of hybridization between humans and other hominid species was brought up, at which time I posed the following observations:

If Native American legends among bands like the Chehalis and other Northwestern tribes are to be taken any more than on count of the novelty of their existence as legends, the multitude of Indian tales involving kidnappings of women by Sasquatches might equally bring forth the notion of forced copulation between similar species (i.e. rape) which, in an evolutionary sense, could be viewed as characteristic of one (male) member of a species’ unsuccessful ability to find a mate and procreate; the psychological component linked to this act with modern humans is representative of the “ultimate intrusion,” which no doubt hints at the evolutionary paths to trust and nurture we also find in child-rearing and development. Ultimately, perhaps all of the “civilized” demeanor we now exhibit today, for which the rudiments have no doubt influenced trust-bearing in all cultures, with generous consideration of sexual attitudes that vary among them, could be rooted in the evolution of sexual interactions (this idea has a pronounced Freudian element to it, I think). But again, in an evolutionary sense, the act of forced copulation provides a very different picture: if we suspend our disbelief for long enough, stories of Bigfoot kidnappings (which were far more common among Native Americans) might suggest a species of humans or proto-humans whose gene pool is becoming so stressed due to limited numbers, that they may have sought forcible coupling based on instinct.

I know that this is pretty far out as a hypothetical, but the result, based on the genetic similarities between varieties of hominids which may have existed over the last several hundreds of thousands of years (and much earlier), might have led to occasional offspring that are effectively “hybrids.” As I understand, since mitochondrial DNA from a father’s sperm is destroyed at the time it fertilizes the female egg, there is really no way to trace forced copulation amidst, for instance, two species like Neanderthals and Cro-Magnons (in which case we might presume the male members of the Neanderthal group had been initiating these liaisons). Subsequent DNA studies about whether Neanderthals and Cro-Magnons may have interbred in this way are mixed, and hardly favorable, though a minority of cases suggest that interbreeding between the species in the way I’ve outlined above (and between two species with 99.5% genetic similarity) could have possibly occurred, but evidence suggests perhaps only a little more than 100 times over the course of thousands of years. Again, the problem with tracing the father’s mtDNA is partly the issue, but posed as a hypothetical scenario, it again also points to the likelihood of hybridization on count of forced copulation.

Return again to these old Native legends of “old Sasquatch men kidnapping Indian women,” and we have a very similar narrative that begins to emerge… if the stories are to be taken literally, which does, again, require some suspension of disbelief. But it is also representative of a theme which, in likelihood, has existed among hominid species for generations spanning thousands of years, and represents an integral component to understanding human evolution, and perhaps the evolution of other creatures that may have existed… or which may even still exist.

Note: For more on the possible hybridization of Cro-Magnons with Neanderthals, there is an interesting story (involving very mixed opinions) regarding this prehistoric skeleton, discovered on the Iberian Peninsula.

Image by Frank Frazetta (view gallery) intended as Fair Use.