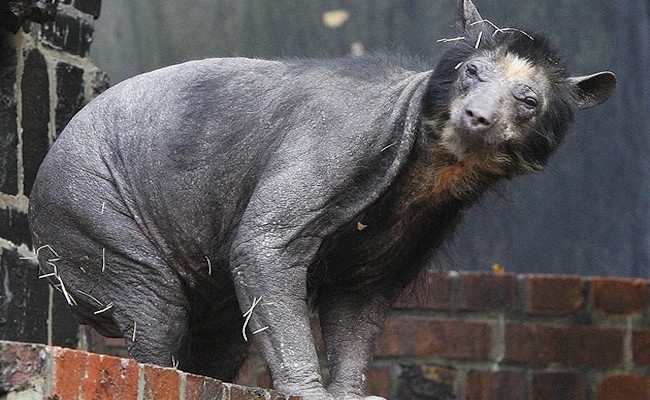 Editor’s note: The image above does not show the same animal described in this story, as we explain below. It is included for illustrative purposes, due to the sensitive nature of the video in question.

Malaysian workers at an oil palm plantation received the shock of their lives recently when they came face to face with an ‘mystery animal’ that they claim attacked them. The incident has caused some controversy, even inciting fury among environmentalists and animal rights groups, as the workers apparently filmed themselves defending against the ‘attack.’

Now, questions of animal cruelty are being leveled against the employees, as the mystery animal, which appears to have suffered from a skin disease, may have been identified from the video they made after the incident.

Initially described as “dog-like” but also bearing monkey-like characteristics, the creature, which appeared to be mostly hairless, was seen at the edge of the forest before it charged at the workers. A news report originally appearing in the Straits Times indicated that the workers defended themselves by striking the mystery beast.

“The unusual animal that looks like a tailless dog crossbred with a monkey was caught on camera by a group of Indonesian workers last Friday.”

“One of the group who saw the beast said workers were shocked when the animal launched itself at them.”

The creature purportedly passed out after one of the workers struck it, then awoke after several minutes, and the workers chased the animal back into the forest nearby.

The entire story of a hairless, dog-monkey might have seemed unbelievable, had it not been for the fact that one of the workers filmed the animal shortly after the so-called attack, documenting the experience as well as offering clues about the creature’s identity.

Environmentalists now believe they have identified the creature as a Malaysian sun bear. The Straits Times reported that Naturetalksback, an environmentalist group commenting on the incident, “also condemned the workers in Sarawak for beating the animal who had wandered into the plantation until it passed out. They also filmed the beating.”

The fact that the incident was filmed has raised further questions about whether the animal had indeed “attacked” the workers, or if it had been just the opposite. 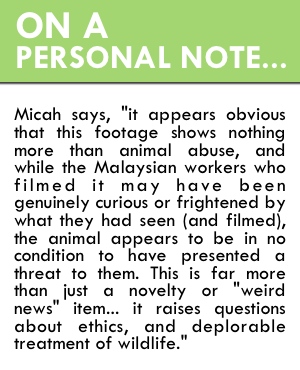 Part of the confusion about the animal had been that it was missing its hair, causing the case to bear similarity to reports in North America in recent years involving “chupacabras,” mystery animals believed to have attacked livestock for several decades. The reports of chupacabras began in the early 1990s in Puerto Rico, at which time the creatures were described as diminutive, reptilian animals with a monkey or human-like appearance and green scaly skin.

However, in recent years, the creatures, as well as cultural beliefs about them, appear to have changed, with descriptions of the animals being doglike, but hairless. Many instances have made news headlines over the last several years involving ‘mystery animals’ believed to be the so-called chupacabras, but in every instance following the capture or retrieval of the animal’s remains, their identities are revealed as foxes, raccoons, or dogs suffering from mange or similar disorders that lead to chronic hair loss.

Due to the fact that some sensitive viewers may find the video disturbing, we have not featured it with this article. The footage can be viewed on youtube here, but we do advise viewer discretion.

Image featured with this article depicts a Himalayan bear with mange, courtesy of notasincreibles.net.