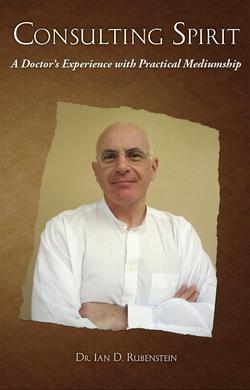 Have you ever felt like you were “called” to a certain activity or profession? This is often the case, with little doubt, among many care workers and those in the medical profession. In midst of the nice paycheck, which is balanced by tremendous pressures associated with administering to those in poor health, there is the fundamental desire to help others that serves as an impetus to enter the field.

Another area many describe receiving a sort of “cosmic calling” toward is that of mediumship. Some will claim to have been able to interact with “spirit” (yes, that’s intentionally in the singular, in reference to the opening chapter of the book we’ll soon be discussing). Others may not have claimed to feel anything during their early life’s experiences, only to “awaken” to a new way of seeing and interacting with the world later on.

This is one reason I must say I have grown to enjoy books like Consulting Spirit: A Doctor’s Experience with Practical Mediumship, so much: they not only tell the stories of everyday people like you or I who “heed the call,” so to speak, and embrace their inner psychic potential, but books of this sort will also tend to serve as a sort of primer for how others may learn to do so just as well.

My own first experiences with psychic phenomenon began to manifest fairly recently, and shortly after reading another of Anomalist Books’ offerings, titled The Lonely Sense: The Autobiography of a Psychic Detective. Immediately, I realize my previous statement may sound suspect: “oh, so he only starts claiming to have psychic experiences after he reads the autobiography of a psychic.” However, the sorts of things the author, Robert Cracknell, offers in his book will become very apparent to those who have had similar experiences (and perhaps unbeknownst to those with inner psychic potentials). In other words, Cracknell begins telling about his early life experiences, and how they began to develop over time, becoming an intuitive sense that stems from the existing five senses, rather than being so much a “hidden” sixth sense or special power (I must say also that, following the completion of Cracknell’s book, the author and I became good friends, and I’ve since shared many of my own “psychic” experiences with him in our correspondences).

But getting back on point, I say all this to frame how real and even familiar a book like Consulting Spirit may indeed seem to those who pick it up and start reading it (and whether or not the reader may think they’ve had any “psychic” experiences of their own). The author, Dr. Ian Rubenstein, shares his own first experiences with the unseen world with utter clarity, beginning with one of his patients, whose name is “Kieth,” appearing in his office late and out of breath, only to explain that he has always been able to see “spirit,” and then launching into a twenty-minute channeling session.

Dr. Rubenstein’s experiences with the familiar “cosmic pulling” ensue afterward, where an increasing number of synchronistic happenings begin to lead him toward practical mediumship himself (this includes a phone conversation with another medium who told Rubenstein matter-of-factly that he had “an alien living in my apartment.”

One of the most particularly revelatory statements I found in Consulting Spirit had to do with the two classifications of phenomena that Rubenstein began to recognize throughout his journey into working with “spirit” himself.

I began to realize there are two classes of phenomena in life: shy things and bold things. Bold things require energy and effort to grab them. They respond well to the expenditure of energy. Western society dedicates itself to bold things: bold enterprises; going for it; grabbing it while you can. On the other had, shy things only come to you when they are ready to. Imagine waiting for a shy animal. If you run towards it, it runs away from you. The more energy you expend, the less you achieve. However if you hold out your hand and just wait, it may come to you.

On a more personal level, this statement alone seems to encapsulate the entirety of my research into the unexplained: there is the “hard core” and tangible phenomenon (well, seemingly tangible, at least) that involves flesh and blood physicality; think cryptozoological critters and the like. These are the “bold things” of the paranormal, and they are the sorts of aspects most people’s minds tend to gravitate toward, especially in the West. Then there are the more subtle elements that involve little synchronicities, strange feelings and minute sensations that don’t come out shrieking at you from the dark corners… they wait in the cover of darkness, and issue messages and meaning that one must look for to be able to recognize. They are the “shy things” Rubenstein outlines… even though in the grand scheme of things, all things deemed “paranormal” might fall within the latter category, at least in the grand scheme of things.

Much like Cracknell’s The Lonely Sense, readers who pick up a copy of Consulting Spirit may not only find this to be an entertaining read; it may also help assist in the unlocking of one’s own hidden psychic potential.

Consulting Spirit is available for purchase through Anomalist Books, and through Amazon.com.